Baird has company in long-time futility 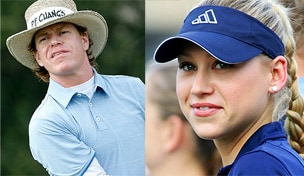 Getty Images
Zach Johnson hits his tee shot on the second hole during the first round of the Northwestern Mutual World Challenge at Sherwood Country Club on December 5, 2013 in Thousand Oaks, California. (Photo by Stephen Dunn/Getty Images)
-

Watching Briny Baird stumble at another finish line on Sunday was painful to watch. Not as painful as it must have been for Baird, but painful nonetheless. As I watched Baird gamely submit to a TV interview, his laughter while talking to Golf Channel's Steve Burkowski only reminded me of the old blues lyric "I'm laughing just to keep from crying."

"This hurts. It really does. This is very disappointing," Baird said after making a final-hole bogey (which could have been worse had he not sunk a long putt) to lose the McGladrey Classic by a stroke to Chris Kirk.

I found myself wondering, who are the other Briny Bairds? Who are the athletes in other sports who have toiled the longest without ever experiencing the "thrill of victory," who have endured the same pain Baird has.

That's not an easy question to answer, even with the magic of Google. The Internet is rife with success-oriented records. But failure? Fail.

Oh, there's no shortage of examples of team failure. It's the usual suspects: Boston Red Sox, 1918-2004; Chicago Cubs, 1908-present; Dallas Cowboys, 1960; Tampa Bay Bucs, 1976; Detroit Lions, 2008. Those last three NFL teams went winless, but only for one season. And while the Red Sox and Cubs experienced long droughts between World Series titles, they did win division championships and pennants along the way.

There are two ways to look at winning and losing in individual sports. A golfer who finishes second can be thought to have lost the tournament, if only because he didn't win it. On the other hand, he did beat 142 players in a 144-player field. That kind of result is often praised by references to such made-up statistics as "top-five finishes." But second place is derided by some as being "the first loser." For everyone who says "great effort," someone else responds with "nice choke."

Still, as Baird, who has earned more than $13 million while playing 365 PGA Tour events without winning, can attest, you don't have to be a winner to make a good living in golf.

Anyway, here are some other athletes who have experienced Baird-like droughts:

Anna Kournikova, women’s tennis: The photogenic Russian was much better known for her figure than her figures, although by no means was she an untalented player. Between 1994 and 2003 she played in 132 Women’s Tennis Association-sponsored events without winning (she did win two International Tennis Federation tournaments). She retired from full-time competition at age 21 in part because of lingering back injuries. Leaving competitive tennis had no effect on her fame, however; she remained the world’s most searched athlete on the Internet for several more years.

Julien Benneteau, men’s tennis: The Frenchman, 0-for-228 on the ATP Tour, is sometimes named as the best men’s tennis player never to have won a tournament. Not that he hasn’t had chances – he is 0-for-9 in finals.

Bobby Wadkins, PGA Tour: Lanny Wadkins' younger brother played 713 PGA Tour events between 1975 and 1998 without a win. But he wasted no time shedding his nonwinner label when he got to the Champions Tour, becoming its youngest winner by claiming the Lightpath Long Island Classic 10 days after he turned 50.

J.D. McDuffie, NASCAR: Holds the record for most starts, 653, in NASCAR's top division, currently known as Sprint Cup, without a win. McDuffie raced from 1963 to 1991, collecting 106 top-10 finishes. He died at age 52 in a racing accident at Watkins Glen International in 1991.

Dave Blaney, NASCAR: Blaney is currently the active driver with the most starts without a win, 465.

Andrea de Cesaris, Formula One: Between 1980 and 1994 the Italian driver made 208 starts without winning, still the F1 record. Several wrecks early in his career earned him the unfortunate nickname "Andrea de Crasheris." In 1982 he had a good chance to win the Grand Prix of Monaco, but ran out of fuel on the last lap.

Zippy Chippy, thoroughbred racing: Though his bloodline includes some of horse racing's greatest names, including Man 'o War, Zippy Chippy somehow turned out to be speed-challenged. Foaled in 1991, the New York-bred gelding went on to lose all of his 100 races before being retired in 2004. He did have two wins, but neither counted. One was against a minor-league baseball player in a 120-foot race, the other against a harness-racing horse. Other horses have had longer winless careers, most notably Dona Chepa, a Puerto Rican mare who went 0 for 125 between 2001 and 2007, but none was as well known as Zippy Chippy.

Perhaps Baird, one of the nicest guys on Tour, can draw inspiration from these athletes who finally broke through to win after years of struggle:

Michael Waltrip, NASCAR: His 0-for-462 streak was worth the wait when he won the 2001 Daytona 500, NASCAR's most prestigious race. His victory was nearly forgotten, however, because that was the race in which Dale Earnhardt was killed. Waltrip went on to win three more times, including the 2003 Daytona 500.

In the immediate aftermath of his sixth runner-up finish, Baird noted how difficult it is to look on the bright side. "You've got to take away some silver linings," he told Golf Channel's Burkowski, but when asked what those silver linings are, Baird said, "I put myself right there in a great position, and ..." Then he laughed a rueful laugh and added, "I don't know what else I learned."