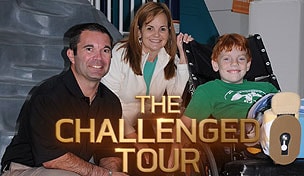 Meet Cooper Burks. A 9-year-old fourth grader, Cooper loves to sing karaoke, is learning to play the guitar and had a blast last summer at acting camp. But his real love is sports.

'He can tell you about any sport and any stats in any sport,' says his mom, Kellye Burks. 'He watches SportsCenter every morning and he reads the sports page every day at home.' Ask Cooper about his favorite sports, teams and athletes and he'll tell you, in complete sentences, that he likes the Atlanta Braves and St. Louis Cardinals, Tennessee Titans and Chicago Bears, and Phil Mickelson and Jason Dufner. That last choice is something of a requirement around the Burks household in Nashville, as Kelly's husband Jeff and several other family members went to Auburn, as did Dufner. 'We are huge War Eagle fans,' she says. 'I was kind of the black sheep of the family and attended Alabama for three years but had to renounce that when I married an Auburn fan.'

Until last year, there was one element missing in Cooper's sports-rich life. He had never actually played baseball, or football, or golf. The reason: He has spent much of his life in a wheelchair.

'Cooper was born with dislocated hips, and to date he's had 17 hip surgeries,' Kellye explains. After being born prematurely, he stopped breathing a couple of times. Doctors aren't certain what caused his condition, but they think he might not have recovered full blood circulation from his waist down after one of his loss-of-breath incidents.

Through all his medical procedures, Cooper has soldiered on. 'He comes out of these horrible surgeries, six and seven hours long, and he's smiling in the recovery room,' Kellye says. And he refuses to let being in a wheelchair limit him. 'Cooper never has an attitude of 'I can't do that.' There aren't many roadblocks that you can put in front of Cooper that are going to stop him.'

Cooper is exactly the sort of kid that golf pro Kevin Corn had in mind in 2010 when he started a golf-as-therapy program at Ranken Jordan, a pediatric hospital in St. Louis. He had seen an article in PGA Magazine about a similar program in Dallas and thought 'Why aren't we doing that here?'

Corn, currently a teaching pro at Oak Brook Golf Club near Edwardsville, Ill., pitched the program to the Gateway PGA Section, of which he is a member. As executive director Josh Riley recalls it, Corn told section representatives he had just taken a tour of Ranken Jordan and said he felt he was being 'called' to do something there.

The section reps were equally impressed after taking their own tour. 'You'd have a kid who was in a wheelchair who played competitive basketball, who had complete use of his arms, he's just as competitive as can be, and he's whacking that (golf) ball, hitting it great,' Riley recalls. 'And then there were kids that you could tell had seriously debilitating illnesses, who had very little use of their hands and arms, but you put your hands on their hands and help them swing that club and you look over and they've got a smile that's just as big as that kid who's competitive.

'Those kids' whole lives are built around the schedule of rehabilitation. When they get to go outside, which isn't often, they really cherish it, and then when they get to see that they can actually do a sport that they probably either in their own mind can't or someone has told them that they can't, it makes it that much better.

'But the common denominator in any successful program is always, No. 1, a really dedicated PGA professional. And that's Kevin, no doubt about it.'

THE SECTION, through its charitable foundation, agreed to donate all the necessary equipment, 'So the program hasn't cost the hospital a penny,' says Corn, who won the section's annual 'Junior Golf Leader' award for 2013. 'They've been incredibly supportive; the only questions they've ever asked are 'What can we do? What do you need?''

Although Corn chose Ranken Jordan, one of two St. Louis facilities ranked among the nation's best children's hospitals by U.S. News & World Report, he could have chosen virtually any other of the city's five pediatric hospitals. 'It's amazing the level and quality of medical care that we have here in this city,' he says.

Ranken Jordan's website explains that it is 'one of only a handful of hospitals in the country that provide rehabilitation and subacute medical treatment for children regardless of their family’s ability to pay. ... For children with complex medical conditions such as brain injuries, congenital defects or complications due to premature birth, Ranken Jordan specializes in bridging the gap between traditional hospital treatment and going home.'

Corn's goal was to provide a physical activity the kids could do to some degree no matter their physical limitations. Some of them were convinced that because they were in a wheelchair, or had to use a walker, participating in a sport was out of the question. But Corn and a group of volunteers wouldn't take no for an answer. They concentrated on what the kids could do, not what they couldn't. One boy came to a session in his hospital bed, where he was restricted to lying on his stomach. With his arms dangling over the edge, he was given a putter and, Corn recalls with a chuckle, 'putted better than I do.'

'There's so many kids that people would say there's no way they can play golf,' Corn says. 'From the first week the only question we have is how can we get them playing golf? It doesn't matter to us what a kid is dealing with or what their prognosis may be or anything else. It's just a matter of how can we get them playing golf while they're there and enjoying it and showing them that you can be involved in sports and athletics and here's something you can do when you leave the hospital if you choose to. We'll get them in touch with the right people when they leave, depending on where they're from. That's to make sure that they can continue on with it if they want to.'

WITH INDOOR and outdoor facilities, the program operates year-round, in good weather and bad. The kids use regular golf clubs donated by the Gateway PGA Section's foundation and hit AlmostGolf practice balls, which fly only a third the distance of regular balls but feel similar. Corn likens them to a firm Nerf ball. Because the balls aren't hard enough to break glass, 'We'll even let the kids hit drivers off the windows,' Corn says. 'They have a blast with that.'

While windows are the target of choice during indoor sessions, which are held in the 'Warner's Corner' indoor playground (it was constructed with money donated by former St. Louis Rams quarterback Kurt Warner and his wife, Brenda), outdoors is another story. 'We found out quickly that the kids like having human targets,' Corn says. 'Anytime you go out there to pick up balls or whatnot, you know you've got a target on your back.'

Having fun is the key. This is not traditional golf instruction (although that is available for anyone who wants it). 'We'll do anything and everything,' Corn says. 'We've played baseball with the golf balls - really just anything that we could come up with that puts a smile on their faces while they're out there. It gets them to the point where, when they see the golf clubs or the golf balls come out, the first thought is fun. If that includes them hitting golf balls and playing like everybody else does, wonderful. But the main thing is that when they see that, they equate it with having a good time. Then they'll want to use (the clubs) and eventually they'll use them the right way.'

Ranken Jordan therapists often include golf in individual patients' programs because of its positive effects on things such as balance, arm and wrist strength and flexibility. Plus, they know the kids like it. 'They've used golf as a reward to get kids to do their (regular) therapy,' Corn says. And when kids leave the program, then periodically come back, often the first thing they say is ''Hey, when's Kevin coming with the golf program?'' Roe says.

Similar to the St. Louis program, the South Florida one has produced many remarkable stories. Section executive director Geoff Lofstead relates one about a boy who had undergone a heart transplant. afterward, during his recovery, 'All he wanted to do was (resume playing) golf,' Lofstead says. The section procured him a set of clubs and now he is taking lessons at a 'regular' golf course. Then there was the teenage girl who could barely pick up a club when she started the program. By the time she was released from the hospital, she said her goal was to make her middle school's golf team. 'Lo and behold,' Lofstead says, 'we found out that she actually did make the team.'

Corn has a wish list of enhancements to the program. He'd love to get an appearance by Dennis Walters, the trick-shot artist who has been paralyzed from the waist down since a 1974 accident. And after a visit by 1987 U.S. Open champion Scott Simpson, Corn would welcome similar efforts by other Tour players.

Corn would also like to take the program national, an endeavor he is pursuing with the mother and stepfather of Zakki Blatt, who was born with a complex heart defect and whose inspiring story is told in the following video, which was shot at this year's U.S. Open.

FOR NOW, Corn will continue to introduce golf to the kids at Ranken Jordan, chronicling the daily miracles through his blog, Birdies and Smiles. 'It's been an interesting 2 1/2 years,' he says, 'to say the least.'

Over that time span, approximately 1,400 kids ages 4-20 have participated since the program debuted on May 10, 2011. Officially it's a once-a-week activity, but according to Corn, 'The kids enjoy it so much that they'll talk about it and they'll have the therapists get the clubs out for them at other times during the week.'

No one enjoys the program more than Cooper, who was referred to Ranken Jordan after one of his surgeries in 2012 and has been back three or four times since.

'He's already counting the days until Saturday, because Saturday is golf day at Ranken Jordan,' his mom says.

She is looking forward to the beginning of 2014, when Cooper is expected to be out of his wheelchair. Then he'll be able to enjoy golf on a whole new level.

'Golf is a great sport for him because it he wouldn't have to do a lot of walking,' she says. 'I think this is going to be Cooper's sport.'