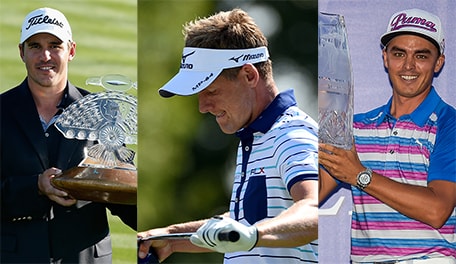 Last December we presented a list of 10 players to watch during 2015. Ever wonder how they did? Wonder no more - here's the rundown:

Why she bore watching: Well, there's the whole niece-of-Tiger thing, but Cheyenne Woods had credentials beyond a famous relative. In 2014 she won her first Ladies European Tour event and secured her LPGA card for 2015.

How she did: It was a rough year. Woods played in 17 events and made just seven cuts, leaving her 125th on the LPGA money list with $32,713. Her best finish was a T-24 in the JTBC Founders Cup, and her best round was a 63, which shared the opening-round lead in the Manulife LPGA Classic. Her scoring average was 73.22.

Why he bore watching: Another player with a famous relative (his father, Wally, is CEO of the Acushnet Company, the parent of Titleist and Footjoy). Peter played a full European Tour schedule in 2014, with two top-10s. He also had a T-4 in the PGA Tour's Sanderson Farms Championship.

Why he bore watching: In his rookie season on the Web.com Tour in 2014, Ortiz led the tour with three victories, finished second on the money list and earned his PGA Tour card for the 2014-15 season.

Why he bore watching: The former world No. 1 had fallen to No. 33 in the Official World Golf Ranking, but was optimistic about a career revival after returning to former swing coach Pat Goss.

How he did: Donald's world ranking has dropped further, to No. 72. On Tour in 2014-15, he had only two top-10s in 20 starts, compared to three in 17 during the previous season. His earnings dropped from $1.4 million to $1 million. Statistically, his driving accuracy dropped, from 63 percent to 59 percent; his greens-in-regulation percentage improved from 63 percent to 66 percent; and his strokes gained-putting dropped from .520 to .290. He is not currently qualified for any of next year’s majors or WGC events.

Why he bore watching: At 21, Thomas became the youngest rookie in the '14-15 PGA Tour class. In just one season on the Web.com Tour, he led in the all-around category and secured a victory during the Web.com Tour finals.

How he did: In his rookie season on the PGA Tour, Thomas played 30 events, making 23 cuts, with seven top-10 finishes. Earning more than $2.2 million, he wound up finishing 32nd in the FedEx Cup standings, narrowly missing out on a trip to East Lake. After all the close calls, Thomas finally cashed in for his first Tour victory this fall at the CIMB Classic in Malaysia.

Why he bore watching: Finau played his first full year on the Web.com Tour in 2014, won the Stonebrae Classic and earned his PGA Tour card for the '14-15 season.

How he did: Finau posted five top-10s and 16 top-25s last season. He finished tied T-14th at the U.S. Open and T-10 at the PGA. The 26-year-old earned just over $2 million, advanced to the BMW Championship and finished seventh on Tour in driving distance at 309 yards. All of it was enough to make him, like Thomas, a nominee for last year’s rookie of the year award.

Why he bore watching: Matsuyama already had a PGA Tour win (2014 Memorial) and was ranked 16th in the world last December, when he was only 22. We wondered if this would be his year for a major breakthrough.

How he did: There was no follow-up victory in 2015, but there were six top-5 finishes, including a runner-up in Phoenix. He was third at the Tournament of Champions, fourth at the Northern Trust, fifth at the Memorial, fifth at the CIMB and — as for the majors — fifth at the Masters. Matsuyama racked up roughly $4 million and is now 14th in the Official World Golf Ranking. He represented the International Squad at this year’s Presidents Cup, going 2-1-1 and defeating J.B. Holmes in singles.

Why he bore watching: Images of him saving par from desert scrub brush — not once, but twice — at the 2014 WGC-Match Play were among the most memorable in golf. He also finished ninth at the British Open and seventh at the PGA Championship.

How he did: The enigmatic Frenchman stayed well under the radar for the majority of the year, struggling with his game. But he re-emerged earlier this month, winning his second Turkish Airlines Open. Dubuisson broke down in the tears after his victory, citing personal issues and a loss of confidence as reasons for his downturn.

Why he bore watching: Fowler was the only player to finish in the top five in all four majors in 2014. Noting that he was working with Butch Harmon, we asked, "2015 has to lead to a win or two ... right?"

How he did: Fowler played his last six holes of regulation in 6 under Sunday at the Players to find his way into a four-hole playoff, which he went on to win for his most important victory to date. Fowler then followed it up with two more high-profile wins at the Scottish Open and Deutsche Bank Championship. He is now sixth in the Official World Golf Ranking. His breakthrough just happened to be overshadowed by two guys named Spieth and Day.

Why he bore watching: He won the Turkish Airlines Open in November and before that, had strong showings at the PGA Championship (T-15) and the U.S. Open (T-4).

How he did: Koepka made us look smart with a quick victory at the Waste Management Phoenix Open. Though injury slowed his momentum in the months after, the 25-year-old steadied himself during the summer, when his worst finish in a seven-event stretch was a T-18 at the U.S. Open. He tied for 10th at the Open Championship and fifth at the PGA. Although he was rather controversially left of the U.S. Presidents Cup team, he is currently eighth on the Ryder Cup points list for 2016.