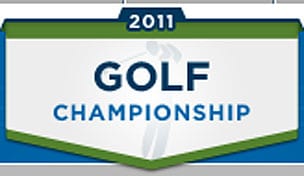 Patrick Reed closed out the Jaguars’ repeat Sunday, beating Georgia’s Harris English 2 and 1 in the featured matchup between each team’s top player.

Now, he and the rest of the team – including Gregory – will scatter.

The rest of the Jaguars’ lineup – Henrik Norlander, Mitchell Krywulycz, Carter Newman and Olle Bengtson – are seniors, and Ryan is turning pro.

“It was a bittersweet win,” Reed said. “We’re all glad to win, but at the same time we’re sad it’s over because that means all of us are going different directions and none of us are coming back.”

Even Gregory is set to become the next coach at his alma mater, SMU, and said it was his last day at Augusta State.

“This is storybook. This just doesn’t happen,” Gregory said. “You just don’t win two national championship and then get to go to your alma mater and coach.”

Reed needed only a double bogey to halve the 17th hole and win the championship after English hit his second shot into a lake left of the green. Reed, who played for the Bulldogs as a freshman, has helped turn Augusta State into a budding powerhouse, right in the shadows of Augusta National.

“I actually liked it because I felt really comfortable with the guys,” Reed said. “I played with them all the time from being there. We just had a great time.”

The Jaguars, who compete in Division II in all sports except golf, also got victories from Mitchell Krywulycz and Carter Newman to win the final match 3-2. Augusta State is the first team to win back-to-back titles since Houston did it in 1984 and 1985.

“If you don’t have players, it doesn’t matter what you can do. It doesn’t matter how big your budget is, how many private planes you have, how many scholarships you have,” Gregory said. “If you can find a way to get players that believe, that’s all that counts.”

Russell Henley and Bryden MacPherson won their matches for Georgia, which was seeking its third NCAA title. The Bulldogs previously won the title in 1999 and 2005 and were hoping to keep up the trend of a championship every six years.

“These guys gave us a lot of thrills this week. These guys are good players and they showed it this week. I am just glad they had a chance to go out with a chance to win a national championship,” Georgia coach Chris Haack said. “That was fun.”

Then, after English hit into the water on No. 17, Reed chipped over the green and then back on to close it out.

After finishing sixth in stroke play qualifying, Augusta State reached the finals by beating another in-state rival – Georgia Tech – and then taking down top-ranked Oklahoma State on its home course in a rematch of last year’s championship.

“We couldn’t have asked for it any better,” Reed said. “Those are the guys we wanted to play, and I was glad we actually got to be able to play them.”

Krywulycz, who rallied from 4-down to beat Oklahoma State’s Kevin Tway in the deciding match last year, prevented Swafford from making a similar rally this year. Swafford bogeyed the first four holes to immediately fall 4-down, then suddenly was back within 1-up by winning the last three holes on the front nine.

Swafford had a chance to take the match to the 18th, but he couldn’t capitalize after Krywulycz also hit his second shot into the water on No. 17. Krywulycz took a drop and got up and down for bogey, and Swafford halved the hole and lost 2 and 1.

Newman, who won in a playoff to get Augusta State to the finals, had a much easier time, winning 7 and 5 against T.J. Mitchell.