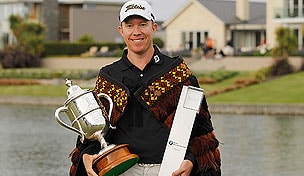 Kennedy closed with a 2-over 74 to match Parry at 7-under 281 at Clearwater Golf Club. Parry took a two-stroke lead to the final hole, but drove into the water and finished with a double bogey for a 69.

“To make a birdie when it counted, that’s why we play golf,” Kennedy said. “To win a New Zealand Open, with all the names that are on the trophy, it’s one of the oldest Opens, is pretty special to me.”

On the 18th in regulation, Parry hit his tee shot into the water to the left of the fairway, then hit into long rough before making a good recovery to reach the green. He missed a bogey putt that would have left him with a one-stroke lead.

Parry again found trouble off the tee on the 18th hole in the playoff, hitting into a bunker. He was facing a 5-foot par putt when Kennedy holed his birdie try.

New Zealand’s Josh Geary was 7 under going to the final hole, but dropped a stroke for a 72 to finish a shot out of the playoff. 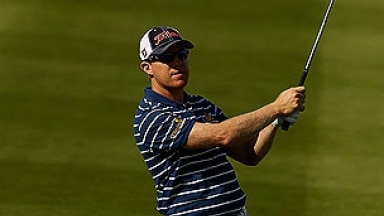 Australian Brad Kennedy shot a 6-under 66 on Sunday to win his first tournament in Japan at the Mizuno Open while earning a place at next month's British Open.