NEWPORT, Wales – A golfer who recently completed a three-month ban from the European Tour for marking his ball incorrectly made a hole-in-one in the opening round of the Wales Open on Thursday.

Elliot Saltman of Scotland aced No. 17 and followed it up with an eagle to shoot a 2-over 73 at Celtic Manor.

Saltman was sidelined after both of his playing partners questioned how he replaced his ball in the first round of the Russian Challenge Cup last September. He made his return at the Spanish Open last month.

Scottish golfer Elliott Saltman hit a hole-in-one during his second round at the Madrid Masters to earn a tasty prize ' his bodyweight in ham. 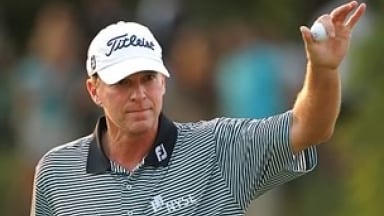 Wrapping up the week in golf, which included Steve Stricker acing his Memorial exam.

Elliot Saltman, who recently completed a three-month ban from the European Tour for marking his ball incorrectly, hit his second hole-in-one at the Wales Open.