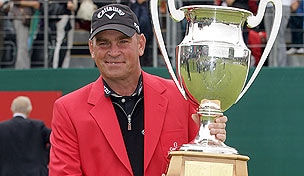 Getty Images
KAPALUA, HI - JANUARY 10: D.J. Trahan lines up a putt during the third round of the Mercedes-Benz Championship at the Plantation Course on January 10, 2009 in Kapalua, Maui, Hawaii. (Photo by Sam Greenwood/Getty Images)  -

CRANS-SUR-SIERRE, Switzerland – Thomas Bjorn secured back-to-back titles for the first time in his career, shooting a 9-under 62 Sunday to win the European Masters.

The victory comes a week after the 40-year-old Dane won a five-man playoff at Gleneagles, Scotland, and is his third title of the year. Prior to 2011, he had not won two titles in one year on the European Tour since 1998.

“It’s been a remarkable week. Golf feels pretty easy at the moment but that’s not always the case,” Bjorn said. “Any time you go out and shoot 62 on Sunday you have got to be delighted.”

The fifth-ranked Kaymer began his round at an even more furious pace, with two eagles on his first five holes followed by birdies on Nos. 7 and 8. But he finished his round with 10 straight pars for a 65.

“If you are 6 under after eight holes you are always expecting more,” said Kaymer, who was fighting a cold. “I was feeling sick and it was difficult but after that start I was fired up and wanted to win.”

Rory McIlroy shot 68 to finish tied for third at 15 under with Jaco van Zyl of South Africa and overnight leader Jamie Donaldson of Wales.

Kaymer and No. 6 McIlroy hoped for victory here to help them climb in the rankings over two Americans immediately above them, Steve Stricker andDustin Johnson, who were playing in Boston this weekend.

Bjorn, a non-playing vice captain for Europe’s victorious Ryder Cup team last year, also took the early lead in the qualification race to defend the trophy in the United States next year.

“There’s remarkable talent on display in European golf. We will take it one step at a time but if I can keep playing well and stay healthy, there’s always a chance,” said Bjorn, who played on winning teams in 1997 and 2002.

McIlroy, the U.S. Open winner, had said Saturday that it was possible to shoot 62 and win the tournament – and Bjorn proved him right.

The Danish veteran, who was 2 over early in Thursday’s opening round, could even afford bogeys at the fourth and 12th holes Sunday. He followed up the first one by making four straight birdies, and added another at the 11th.

After his second bogey he looked in trouble again when his second shot at the par-5 14th landed in deep rough beyond the green-side lake.

“Fourteen was a big break,” said Bjorn, who found a decent lie and got down in two for a birdie. He then sank a 12-footer for eagle at the par-5 15th.

Already clear of the field, Bjorn buried two more eight-feet putts at the closing par-4s to shoot the lowest score of the week in the thin Alpine air.

Kaymer was four off the lead overnight and started his charge early. He eagled the par-5 first and added another at the fifth, finally taming a par-4 he had described as “easy” all week.

The 2010 U.S. PGA champion then birdied the seventh and par-3 eighth to take the outright lead.

However, Kaymer’s challenge stalled as the former top-ranked player failed to make a birdie after the turn.

McIlroy birdied the first two holes to share the lead at 14 under, sinking a 25-footer at the second before his putter went cold.

The Northern Irishman three-putted at the 339-yard (310-meter) fifth after driving beyond the pin and let mid-range chances slip at the seventh, ninth and 11th.

McIlroy threatened to contend with birdies at the back-to-back par-5s but Bjorn soon raced clear.

Second-ranked Lee Westwood began the day trailing Donaldson by one stroke and birdied the first, but could not sustain his challenge. Westwood carded a 70 to finish 14 under, tied for sixth place.

Before being presented with the trophy on the 18th green, Bjorn and a packed grandstand of spectators watched a giant screen tribute to the late Severiano Ballesteros after whom the course is named.

“For my generation, he was everything to the game of golf,” Bjorn said of Ballesteros, a three-time winner here and his captain at the ’97 Ryder Cup. “He was a true inspiration to everybody and a wonderful friend. I take a lot of pride in having known the man.”