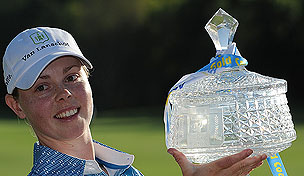 She was one shot clear of overnight leader So Yeon Ryu and Kim Ha-neul of South Korea and Italy’s Diana Luna.

American teenager Lexi Thompson closed with a 68 and finished on 11 under.

“It’s never over until it’s over,” Boeljon said after overcoming a three-shot deficit to clinch the Gold Coast event, which was jointly sanctioned by the Australian Ladies Professional Golf and Ladies European tours. “I never guessed I’d be holding this trophy, it’s very special. Starting the season off with this win, it’s amazing.”

It was a second LET victory for Boeljon, who made her debut for Europe in the Solheim Cup last year.

U.S. Open champion Ryu started the final round with a three-stroke lead, due mainly to her 11-under 61 on Friday, but closed with an even-par 72 and was overtaken on the last hole.

“I think I need to trust myself more,” Ryu said. “My mind is too busy, I need to think simple.”

Luna and Kim each finished with rounds of 67 to claim a share of second place.

Sharing the lead with three others as she walked to the 18th tee, Boeljon reached the green in two and, with Ryu in the greenside bunker, left her eagle putt about 5 feet short. She made the birdie putt while Ryu flew her bunker shot too far.

Lydia Ko, the 14-year-old New Zealand amateur who became the youngest winner of a professional golf tour event with her victory at the New South Wales Open last weekend, finished as the leading amateur on 6 under at the Ladies Masters.

Veteran Laura Davies of England shot a 71 and finished well off the pace at 4 under. Seven-time champion Karrie Webb did not play and will start her 2012 season next week at the Australian Open, which is co-sanctioned by the LPGA Tour.

Boeljon, Ryu, Kim and Luna will all play at the Australian Ladies Open at Royal Melbourne. 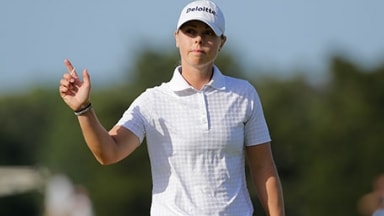 Christel Boeljon walked away from Sunday’s ShopRite Classic with her best finish in five seasons playing the LPGA, and yet there was still a cruel twist to it.