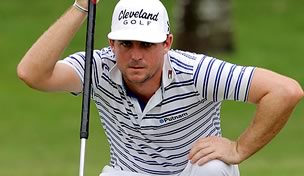 KUALA LUMPUR, Malaysia – Keegan Bradley is playing so well at the CIMB Classic that not even the fact his beloved Boston Red Sox are in the World Series can distract him.

Teeing off on Friday in Malaysia while the Red Sox were playing the St. Louis Cardinals in Game 2 of the World Series in Boston, Bradley sunk seven birdies – including five in a six-hole stretch on his back nine – to shoot a 6-under 66 and open up a four-stroke lead over Ryan Moore heading into the weekend.

He's at 13-under 131 for the tournament, an official event on the PGA Tour for the first time.

Bradley, who grew up near Boston in Woodstock, Vt., is such a big Red Sox fan, his bio on the Tour website lists his ''biggest thrill outside golf'' as Boston's World Series triumphs in 2004 and 2007.

But even though he's been getting updates on this year's series from his girlfriend, Jillian, on the course, he's kept his focus on his own game. So much so, in fact, he's playing some of his best golf – even though the Red Sox lost on Thursday to even the series at one game apiece.

''In the back of my mind, I'm wondering what's going on (with the Red Sox),'' he said. ''I know my mom at home is flipping back and forth, watching. It's fun to know yesterday the Red Sox won, the (Boston) Bruins won and I shot 7 under.''

Bradley has carded only one bogey in 36 holes at the Kuala Lumpur Golf and Country Club. And he nearly had an eagle and another birdie on the back nine on Friday, missing both putts by inches.

''It's hard to remember a time where I've been more dialed in than these last two days,'' he said.

Moore didn't follow up his stellar play in the opening round – when he made 10 birdies – with an equally strong second round. He had three bogeys to go with three birdies in an even-par 72 and sits at 9-under 135, a stroke ahead of Kiradech Aphibarnrat and Chris Stroud in a tie for third.

''Obviously it wasn't the round I had yesterday but amazingly enough it wasn't too dissimilar,'' Moore said. ''I hit a lot of really good putts today that just were just right on the edge, burning the edges, so overall I'm still very happy with my game and where I'm at.''

One player who's not at all happy is Phil Mickelson, who again struggled with wayward drives a day after saying his swing is as bad as it's been in a long time.

After a long wait caused by a backup at the 10th hole, Mickelson pulled his tee shot to the left, just out of bounds under a tree. He clenched his teeth and muttered to himself, but was in better spirits when he reached the ball, joking to the crowd, ''Everybody OK? Sorry about that.''

Then, on the back nine, Mickelson gave himself two tough chip shots from sand traps onto the greens that led to back-to-back bogeys on the 13th and 14th holes. He birdied his last two holes to salvage a 2-under 70, but that didn't give the five-time major winner much solace.

''I don't have the control of the swing that I'd like,'' said Mickelson, who is 10 strokes off the pace at 3 under. ''I'm not sure which side I'm going to miss it on and playing this golf course from the rough, which I did today is extremely difficult. The rough is tough. You're fighting for pars the whole day.''

Mickelson said before the tournament he'd be taking more time off this season and playing fewer events so he can focus more on trying to win the majors, particularly the U.S. Open, which would complete a career Grand Slam. But his biggest priority right now is fixing his swing.

''I've got a lot of issues and I think that I'll address it more in the offseason. This week and next week (at the HSBC Champions in Shanghai) are going to be difficult,'' he said.

The surprise of the Malaysian tournament so far has been Aphibarnrat, who briefly shared the lead on Friday before Bradley went on his back-nine birdie run.

The Thai is competing in just his fourth PGA Tour event but didn't look out of his element playing alongside Mickelson and defending champion Nick Watney. He knows this course well – he won the Malaysian Open at the same golf club in March to earn his European Tour card.

He has a chance to receive a two-year PGA Tour exemption and invitation to the Masters with a win on Sunday.