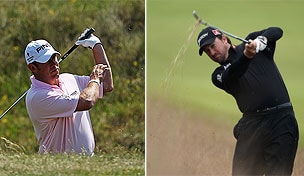 Getty Images
CARNOUSTIE, SCOTLAND - OCTOBER 09: Hollywood actor Samuel L Jackson takes a hot drink on the first tee during the third round of The Alfred Dunhill Links Championship at the Carnoustie Golf Links on October 9, 2010 in Carnoustie, Scotland. (Photo by David Cannon/Getty Images)  -

SANDWICH, England – Lee Westwood was full of bluster and confidence on the eve of the British Open, claiming he had the patience required to conquer Royal St. George’s and capture that elusive first major.

They looked like hollow words on Friday as a second-round 73 for a 4-over total threatened to send a frustrated Westwood tumbling out of the tournament before the weekend.

With another high-profile Briton – Northern Ireland’s Graeme McDowell – also struggling to make the cut after a 7-over 77 in his second round, the major players from the home nations weren’t having things their own way on the southeast coast.

Much had been expected of the second-ranked Westwood at Royal St. George’s. A top-3 finisher in all the majors, he ended Tiger Woods’ 281-week reign as No. 1 in October and has been one of the world’s most consistent performers in 2011.

However, he followed an opening-round 71, during which he had looked sullen and irritable, with another poor display.

Both of his rounds were played when the course conditions were at their most benign, making his performance at Sandwich even more disappointing. He was so unhappy with his second round that he refused to show up for scheduled interviews.

Attempting to shrug off the tag of best current player to not have won a major, Westwood started Friday like he meant business by making a birdie at the par-4 first.

But a dropped shot at No. 2 was soon backed up by a double-bogey 6 at No. 8, and he was even par after the turn.

Just to rub salt in his wounds, playing partner Charl Schwartzel of South Africa – one of the recent batch of major winners that Westwood is striving to emulate – shot a 3-under 67, leaving The Masters champion in a good position on 2 under.

McDowell also looks to be on his way home early after finishing on 5 over, following an error-strewn second round where he failed to make a single birdie. The projected cut is 3 over.

The 2010 U.S. Open champion said he had come to the British Open in good form but with the wrong attitude.

“I just don’t have that dig deep in me at the minute – it’s weird,” McDowell said. “I’ve had half a dozen rounds in the high 70s this year. It’s not me. I need to have a look at my mental approach a little bit.

“I’m not in the right frame of mind right now. There’s something going on. Maybe my expectation level is putting a little too much pressure on myself.”

With top-ranked Luke Donald of England and tournament favorite Rory McIlroy of Northern Ireland shooting over-par scores in the first round, Britain could be looking elsewhere for the home champion.

Darren Clarke, the 42-year-old Northern Irishman widely regarded as the golfing mentor to U.S. champion McIlroy, is the clubhouse leader on 4 under.