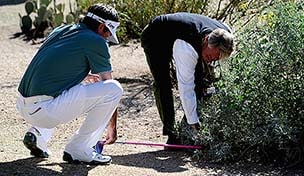 SCOTTSDALE, Ariz. – A desert critter saved leader Bubba Watson at least a stroke Saturday in the Phoenix Open. Some pigskin play cost Phil Mickelson to the chagrin of the rowdiest fans in the largest crowd in golf history.

The estimated 189,722 in attendance had a lot to see on a sunny, cool day at TPC Scottsdale.

Watson's drive on the par-5 13th went into a desert bush and settled next to a burrowing animal hole that would have interfered with his swing, giving him a free drop.

''Right next to my ball was a burrowing animal hole and my club was going to hit it at impact,'' Watson said. ''It was big hole and the club would get caught on it. So, I got a free drop and could easily wedge it out.''

He hit a 150-yard shot to the fairway, followed with a wedge to the fringe and two-putted for par on the way to a 3-under 68 and a two-stroke lead.

Without the free drop, he thought he could have played a shorter shot.

Mickelson made a double bogey on the par-3 No. 16, the 20,000-seat stadium hole where he ''lost focus'' thinking about throwing footballs into the crowd.

The defending champion half-shanked his tee shot left on the 128-yard hole. He followed with a weak flop shot into the bunker, blasted to 8 feet and two-putted.

''It was a gap wedge. It was pathetic,'' Mickelson said. ''I don't even know what to say. I don't remember ever hitting a shot like that even in practice.''

On the positive side, the former Arizona State player threw some nice spirals and showed no signs of the back pain that forced him to withdraw last week at Torrey Pines.

''My brother, who is the ASU golf coach, brought out some ASU footballs that I signed and threw out there,'' Mickelson said. ''I think it's the last time I'm going to do that, because mentally I was thinking about throwing it a couple holes prior.

''It took me out of my element. I hit the worst shot imaginable, and then I followed with four other terrible ones. It was just some of the worst shots imaginable. I just lost focus and I think a lot of it was due to the fact that I have never done something like that on the 16th hole. I thought it was going to be fun.''

Winless since the 2012 Masters, the long-hitting left-hander also scrambled to save par on the par-5 15th, holing a 15-footer after losing another drive to the right.

His 7-foot birdie try on 16 stopped on the right edge, but he holed a curling 12-footer for birdie on the short par-4 17th after another drive went far right. He saved par on the par-4 18th after driving over the water into the left rough.

''I held it together, stayed focused on what I was trying to do, made nice up-and-down on 17 for birdie,'' Watson said. ''Tough lie on 18 and somehow two-putted to have a little lead. ... Luckily, nobody went crazy on me.''

He was upset about the pace of play.

''The back nine just got real slow and sluggish and I just kind of lost focus a little bit on my tee shots,'' Watson said. ''We need to be under five hours tomorrow. I want to watch the Super Bowl.''

The tournament set an attendance record for the fourth straight day, breaking the day mark of 179,002 from the third round last year. Since Monday, an estimated 502,776 people have attended the event. The record of 538,356 was set in 2008.

''It was packed out there,'' said Scottsdale resident Kevin Stadler, second after a 67. ''It's something you only experience once a year.''

Steele had the best round of the week.

''I was just trying to make as many birdies as I could,'' Steele said. ''It's kind of the luxury when you make the cut by a shot. You have more to gain and not much to lose.''