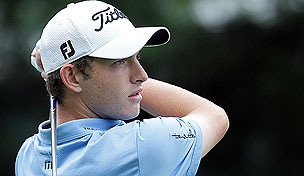 CROMWELL, Conn. – Nineteen-year-old UCLA star Patrick Cantlay has insisted he has no intention of leaving school early to join the PGA Tour.

But the low amateur last week in the U.S. Open softened his stance just a little Friday after shooting a course-record 10-under 60 – the lowest PGA Tour round ever by an amateur – to take a four-stroke lead in the Travelers Championship.

Taking advantage of preferred lies at soggy TPC River Highlands, Cantlay tied the tournament record set by Tommy Bolt when the event was played in Wethersfield in 1954.

Cantlay birdied the final two holes to reach 13 under. After shooting a 67 on Friday morning in the rain-delayed first round, he had eight birdies and an eagle in the afternoon. It was his second eagle of the day on the par-5 13th.

He said he had no idea that he was setting an amateur record.

But he came close. His approach landed just above the hole and rolled back to just over 2 feet below the pin.

“I thought it had a chance, it was covering the flag pretty good,” he said. “It takes some luck.”

D.J. Trahan (62), Webb Simpson (65), Alexandre Rocha (66) and Vaughn Taylor (66) were tied for second along with Andres Romero who had completed five holes when play was suspended because of darkness just after 8 p.m. Seventy-seven players are scheduled to complete the second round Saturday.

Players had perfect scoring conditions Friday with rain-softened greens and little wind. And because of the wet conditions, players were allowed to lift, clean and place their golf balls hit in the fairway, another big advantage. The projected cut line was 3 under par.

An amateur hasn’t won a PGA Tour event since Phil Mickelson in the 1991 Northern Telecom Open in Arizona. If Cantlay wins, he would have 60 days to decide whether to accept a spot on the Tour and the two-year exemption that goes with it.

Four players have shot 61s at the TPC River Highlands course. The last was Kenny Perry in 2009.

Tour rookie Jim Renner shot 29 on his first nine holes and finished his first round with a 63, good enough for a one-stroke lead heading into the afternoon.

But he started his second round with a bogey, a par and a double bogey and finished the day at 3 under.

Renner had played in just one Tour event before this season and earned his card through qualifying school. He grew up in Plainville, Mass., and said this tournament was the first PGA Tour event he ever attended.

The shot of the day came from Heath Slocum, who holed a 160-yard shot across the water to eagle the signature 17th hole. He finished his two rounds at 7 under.

But Cantlay stole the show, and received a standing ovation from the sparse crowd as he walked up the 18th fairway.

“It’s just one round,” he said. “It was a good round, and I played really well. Nothing bad happened. I’m really proud of it, but I’ve got a couple more rounds to play.”