Cantlay's lead through two rounds shrunk to one 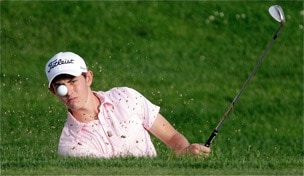 CROMWELL, Conn. – Nineteen-year-old Patrick Cantlay’s lead has shrunk to a single stroke at the end of the second round of the Travelers Championship.

The UCLA star shot a 60 on Friday, the lowest round ever by an amateur on the PGA Tour, and had a four-stroke lead when play was suspended by darkness.

But Johnson Wagner finished his second round with a 63 Saturday and is 12 under for the tournament, one behind Cantlay going into the third round. Nick Watney and Shane Bertsch are at 10 under. Eight others are four strokes back.

The cut line was at 4 under par, the lowest on Tour this season. First-round leader Jim Renner was among those who failed to make it.