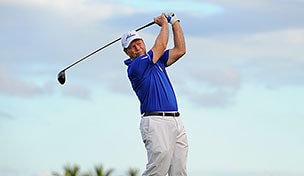 NAPLES, Fla. – Tom Watson arrived late at the ACE Group Classic because of his duties as U.S. Ryder Cup captain. The 64-year-old star got up to speed in a hurry Thursday in the pro-am.

''I made five birdies on the back nine today so I'm happy with that,'' Watson said. ''It gives me a pretty good feeling going into tomorrow.''

Will they talk Ryder Cup?

Defending champion Bernhard Langer - the winner of the season-opening event in Hawaii on Jan. 19 - also is in the field along with Michael Allen, a playoff winner Sunday in the Allianz Championship in Boca Raton. Allen opened with a record-tying 60 en route to his sixth career Champions Tour victory.

''I always feel like I have to start over,'' Allen said. ''I'm the only guy who has a chance to win two in a row so I'm going to enjoy that and see if I can go out tomorrow and get aggressive and get after it and get myself up on the leaderboard and get close for Sunday.''

Watson came from Los Angeles where he named Raymond Floyd as his second assistant for Ruder Cup. Watson also was the captain in 1993, the last time the U.S. won on foreign soil.

''It was a wonderful time, a high-pressure time, pressure-packed time but it always left me wanting, wanting to do it again,'' he said. ''And I'm very happy to be able to do it again.''

''It's a fantastic coup,'' Montgomerie said. ''They brought back stature and class and respect into the captaincy of the Ryder Cup team.''

In his first full season on the Champions Tour, Montgomerie said he has received a warm welcome, not only from the players but from the gallery.

''People are slightly sort of cagey when they first meet me because it's first impressions, obviously, wherever I go here because I haven't been to these places before,'' he said. '''Oh, God it's him, you know?' Then actually, 'He's all right. He's OK.' Yeah, so it's nice to start from a base of zero.''