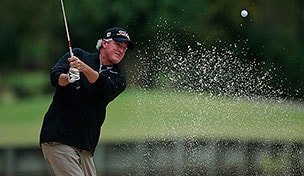 Getty Images
Gloriana Soto listens to Michael Breed as he discusses the importance of his tips on Big Break Academy.  -

CARY, N.C. – Russ Cochran shot his second straight 6-under 66 on Saturday to take a two-stroke lead after the second round of the Champions Tour's SAS Championship.

The 54-year-old left-hander, the 2010 winner at Prestonwood Country Club, birdied five of the first six holes, dropped a stroke on the par-5 seventh and added birdies on Nos. 15 and 17. He won The Principal Charity Classic in Iowa in June for his fourth victory on the 50-and-over tour.

''They were going in from everywhere,'' Cochran said about his fast start. ''It just felt comfortable and felt easy.

Then the bogey on No. 7 stopped the momentum.

''I kind of let it slip,'' he said. ''It's not often you get in that groove where you know something good's going to happen. And you've got to shoot so low to win. There's five or six world-class players obviously that are right there, and I know I'll have to really play well (Sunday).''

Defending champion Bernhard Langer, Kirk Triplett and David Frost were tied for second. They each shot their second straight 67. Triplett is coming off a successful title defense two weeks ago in the First Tee Open at Pebble Beach.

Triplett said it's hard for him to turn things around when he's playing poorly. But with six top-10 finishes in the past seven tournaments, he said his confidence is high.

''I didn't play my best round the last two days, but I got a lot out of them,'' Triplett said. ''I'm not afraid to make a few putts, and I'm not afraid to be in contention and looking forward to tomorrow. I feel like if I can play a little bit better and continue to putt the same way, I can shoot a very low score.''

Michael Allen was three strokes back at 9 under after a 68, and Charles Schwab Cup points leader Kenny Perry (68) was 8 under along with Olin Browne (66), Anders Forsbrand (67) and Craig Stadler (68). Perry won the 2011 event for his first Champions Tour title.

Jeff Sluman was disqualified after he told rules officials Saturday morning that he had accidentally used two models of balls during his round Friday. No penalty strokes were assessed Friday, and he signed an incorrect scorecard. He was 4 under after the first day, two shots behind the leaders.