Cochran out front at First Tee Open, Thorpe nearby

PEBBLE BEACH, Calif. – Russ Cochran made six consecutive birdies and shot a 7 under 65 to take the first-round lead at the First Tee Open on Friday.

Cochran had seven birdies overall and played a bogey free round in his return to the Champions Tour after suffering a wrist injury that led to a two-month layoff. Cochran was only 1 under through 11 holes before going on his run of birdies at the Pebble Beach Golf Links.

“I really didn’t know what to expect,” said Cochran, who is ninth on the money list this year. “I just haven’t been pushing it. I’ll know tomorrow how it feels but right now it feels fine. Obviously when you’re making putts and hitting good shots, it sure helps it feel a lot better.”

David Eger was one shot back at 66, followed by Brad Bryant, Morris Hatalsky and Jim Thorpe at 67. Ten others were tied at 68.

Defending tournament champion Ted Schulz struggled all afternoon and was at 1 over 73.

The three-day event is being played on two 18-hole courses on the Monterey Peninsula. Most of the low scores came at the 6,365-yard Del Monte while Cochran opened on the 6,871-yard Pebble Beach.

A two-time winner on the 50-and-under tour in 2010, Cochran had three top-five finishes in seven events before injuring his right wrist hitting a divot during the second round of the Liberty Mutual Legends of Golf tournament in late April.

It’s the same wrist that Cochran previously had surgery on, and although he finished the tournament and played 18 holes at an appearance the following day, it ultimately knocked him out competition for a while. Cochran eventually met with a specialist in New York but played golf only sparingly over the next month and not on the tour.

Cochran, who shot a 65 in the final round of this tournament in 2010, started on the back nine and hit his opening tee shot into a bunker but made a nice recovery and sank a 10-foot birdie putt. He stayed at 1 under at the turn, then narrowly missed a birdie putt on the par 5 No. 2 before storming to the top of the leaderboard with his stellar run.

The six consecutive birdies matches the best streak on tour this season.

“After playing nine or 10 holes without a birdie, all of a sudden they just started falling in from everywhere,” Cochran said. “If you get a couple under or par or see a couple putts go, then the golf course and the greens especially look a little different to you. I won’t say I’m shocked that I played that good. My job is going to be trying to continue to follow it up, not (just) this week.

Eger, who teamed with Mark McNulty to win the Legends event, moved into contention with five birdies over his final eight holes.

“I struggled the first 10 holes and didn’t hit many greens,” said Eger, a runner-up to Tom Watson at the Senior PGA Championship in May after losing a one-hole playoff to the Hall of Famer. “Then starting on 11 I started playing much better. The good scores are obviously going to be over here at Del Monte.”

Bryant overcame a bogey on No. 7 and closed his round with an eagle on the par 5 ninth.

John Cook, winner of the Montreal Championship last week, was six strokes behind Cochran at 71. Cook is the only one of the top four players on the Charles Schwab Cup points list playing here. 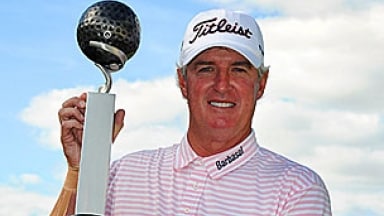 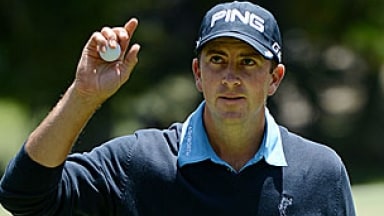 Senior British Open champion Russ Cochran withdrew from the British Open Thursday and first alternate Michael Thompson will replace him in the field.

Russ Cochran shot a 6-under 66 on Friday to take a two-stroke lead after the first round of the Champions Tour's Montreal Championship.