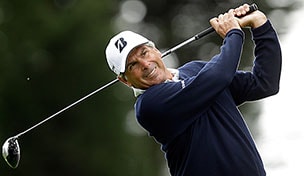 Getty Images
Adam Scott of Australia in action during the final round of the PGA Grand Slam of Golf at Port Royal Golf Course on October 16, 2013 in Southampton, Bermuda. (Photo by Ross Kinnaird/Getty Images)  -

''I enjoy having a lead,'' Couples said. ''Sometimes when you go and play with a lead, you try to expand it. If you're behind, every shot is important. I don't do well with that. I'm just going to go out and play. For the most part it's about stepping up and just hitting it.''

Mark O'Meara was second after a 67.

''He'll be hard to beat, no question, with his power and length,'' O'Meara said about Couples. ''I have no problems with Freddy at all, he's been great for the game.''

Fred Couples and Mark O'Meara have known each other since both qualified for the PGA Tour in 1980.

''The best things are the pairings,'' Couples said. ''I get Mark O'Meara and it couldn't get any better for me.''

Defending champion Tom Lehman had the best round of the day, a 65, to join Bart Bryant and Peter Senior at 9 under. Bryant shot 70, and Senior had a 72.

Charles Schwab Cup points leader Kenny Perry was tied for seventh at 7 under after a 67. Bernhard Langer, needing a victory and help to catch Perry, also was 7 under after a 71.

Couples opened the round with a bogey. He easily shook that off and worked his way under par for the day.

''It's almost laughable,'' he said. ''I could play that hole 100 times and always make par. Making a good drive on the first hit and not making par is ridiculous.''

''I'm not going to get down on myself over my putts,'' Couples said. ''I missed a lot of putts. The worst I could have shot today was what I shot. The first two rounds were my best of the year. Today was not as easy.''

O'Meara played consistently well through the day, with his only hiccup a bogey on 17. He finished with a birdie on 18.

''I drove the ball pretty well,'' O'Meara said. ''I had some good opportunities early in the round when I hit good putts that just missed the hole.''

O'Meara recalled that Couples slept in his car during the first stage of the qualifying tournament in 19800, but was invited to stay with O'Meara the final two or three days of Q-school.

''We've both had fairly parallel careers,'' O'Meara said. ''We both made it through Q-school and the rest is history.''

Couples and O'Meara wound up playing together on the final day of Q-school in Fresno.

''I was the last guy to make it make it,'' Couples said. ''I think he was one shot better than me, but we both qualified and neither of us ever had to do that again.''

Couples said he was confident if one of his shots detoured into the rough.

''I like this kind of rough,'' he said. ''If you put me in the soft, fluffy stuff, I don't do very well. Here I can almost hit like little bunker shots. I just feel like I can get my club through this grass.''