NAPLES, Fla. – Fred Couples was in position for his first Champions Tour victory. He’ll have to hold on to the lead at the ACE Group Classic for at least 23 holes on Sunday to do it.

Couples sank a 48-foot putt from well off the green on No. 12 for eagle, then made a 12-footer for birdie on No. 13 to reach 9 under before second-round play was called due to darkness Saturday.

Dan Forsman was in second place, three shots back at 6 under. The two shared the first-round lead at 4 under after finishing their first rounds earlier Saturday.

Couples is one of 38 golfers who must come back Sunday morning to complete their second rounds at The Quarry. The tournament was pushed back after high wind postponed the first round Friday afternoon.

When the first round ended early Saturday afternoon, Couples and Forsman both finished 4-under 68 to share the lead.

Bernhard Langer is the only one near the top of the leader board to have completed the second round. He’s shot 6-under 66 and is tied for third, four shots behind Couples, along with Mike Goodes, Scott Hoch, Tommy Armour III and Ronnie Black. Langer moved up the leaderboard with an eagle on No. 12 and a birdie on No. 17.

Paul Azinger, a 12-time winner on the PGA Tour and captain of the victorious 2008 Ryder Cup team, is making his Champions Tour debut at The Quarry, the tournament’s third site in three years. He was even par with three holes left.

The 50-year-old Couples is coming off a 37th-place tie last week in the PGA Tour’s Northern Trust Open at Riviera. He made two senior starts in Hawaii last month, teaming with Nick Price to finish third in the Champions Skins, then losing to Tom Watson by a stroke in the Mitsubishi Electric Championship. 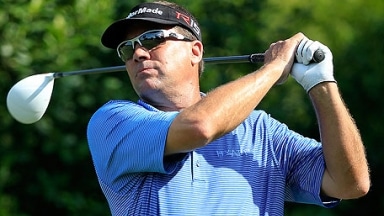