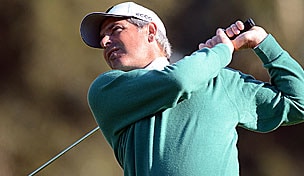 After winning in 2011, Couples missed the event last year because of a back injury. Two years ago, he shot 62-62-66 for a seven-stroke victory. He had 26 birdies, matching the tour mark for a 54-hole event.

''I shot crazy scores,'' Couples said Thursday, a day before play opens on the Pete Dye-designed AT&T Canyons Course. ''There are some really hard holes that don't fit my eye, and I played them well. There were some holes that I was able to cut off the tee, or I hit the fairway on par 5s and had shorter clubs into (the green) than most.''

The U.S. Presidents Cup captain is making his first start since tying for 18th late last month at Pebble Beach in the First Tee Open. He's winless in 13 tour events this year and has four runner-up finishes.

The tournament is the final regular-season event of the year. The top 30 on the money list Sunday will advance to the season-ending Charles Schwab Cup Championship next week at TPC Harding Park in San Francisco. Kenny Perry leads the Charles Schwab Cup standings, 494 points ahead of second-place Bernhard Langer.

David Frost won last year, beating Langer with a birdie on the second hole of a playoff.

Two-time PGA Tour winner Jose Coceres is making his Champions Tour debut. He has been eligible since August, but a left wrist injury delayed the Argentine's start. To prepare for his first event, he played two events on the PGA Tour – missing the cut in the Frys.com Open and tying for 30th last week in Las Vegas.