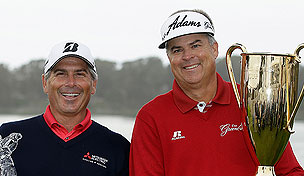 Getty Images
Inbee Park of South Korea reacts after a shot on the ninth hole during the first round of LPGA KEB-HanaBank Championship at Sky 72 Golf Club Ocean Course on October 18, 2013 in Incheon, South Korea. (Photo by Chung Sung-Jun/Getty Images)  -

Couples ended a 16-event winless streak dating to the Senior British Open in July 2012, closing with a 2-under 69 for a six-stroke victory over Bernhard Langer, Peter Senior and Mark O'Meara. The Hall of Famer has nine victories in four seasons on the 50-and-over tour after winning 15 times on the PGA Tour.

After playing 15 events on the Champions Tour this year and finishing third in the points race, Couples indicated he was going to play at least two or three more events next year and take a shot at winning the Charles Schwab Cup. His points finish earned him a bonus $300,000 annuity.

Couples finished at 17-under 267 at TPC Harding Park.

''This year, I wouldn't call it a waste, but it was a waste as far as not winning,'' he said. ''This week was different. I did not miss many shots. I got the lead and I kept it. I'm not a fierce competitor but I love the competition. Just winning, even if it's a club championship, you're thrilled.''

Langer, second behind Perry in the Charles Schwab Cup standings, shot a 67. Senior had a 69, and O'Meara closed with a double bogey for a 70.

Perry had a 68 to tie for fifth at 10 under. He led the tour with three victories, taking the Senior Players Championship and U.S. Senior Open in consecutive tour starts and winning the AT&T Championship last week in San Antonio.

''It's been a magical season,'' said Perry, who was accompanied by his wife, three daughters, their husbands and a couple of grandchildren. ''This is my highest accomplishment. I've been close to winning a major on the PGA Tour and to finally win a few this year, it's the things dreams are made of.''

Perry, who took over the points lead in July, joked all week about how he had a 29-1 chance of winning the points race. Langer needed to win the tournament and have Perry finish outside the top five to win.

''I'm thinking I've got to play,'' Perry said. ''All year my head was everywhere and I was trying to focus. But the dream came true. I was, probably, playing the best golf I've ever played. I can't wait to go out and celebrate with my family.''

''Fred played very well,'' O'Meara said. ''He did what he had to do. It's not easy with the lead. He drove the ball pretty darn good and he putted pretty well and that's what it takes.''

Cutting his teeth on a public course in Seattle, Couples said TPC Harding Park, which will undergo an extensive renovation on the greens, always was a special place for him.

''I've said it all week. It's Harding Park. This is a tremendous golf course,'' he said. ''It doesn't seem really hard but if you miss the ball in the wrong spot, or miss the green, it can play really hard. It's one of my all-time favorites.''