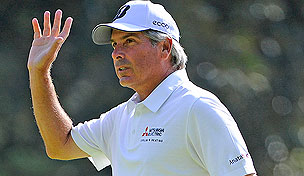 ''I worked pretty hard but I drove it all over the lot,'' Couples said. ''I made some putts and when you do, you have a chance.''

Couples had to scramble on the final hole to take the outright lead. After hitting his approach over the green, he hit a flop shot to set up the birdie putt.

''I hit a 6-iron and it was way too much club,'' Couples said. ''To get up and down from there for me was kind of miraculous.''

Colin Montgomerie, Bernhard Langer and Steve Pate tied for second. Langer had a chance to force a playoff, but missed a 20-foot birdie try on 18 and settled for a 70. ''I knew where I stood,'' Langer said. ''I asked someone and they told me Freddy birdied. I just hit a bad shot.''

''It was a great day,'' Couples said. ''I was a little salty out there at times. I assumed someone would get to 16 under. I'm just happy I made some birdies.''

Langer's approach on No. 18 ended up left of the green up against a hospitality tent. After a drop, he chipped 20 feet past the hole and his birdie putt missed on the left side.

''I pull-hooked it and when you are left, especially short and left you have no chance,'' Langer said. ''I hit a good putt, but it didn't go in.''