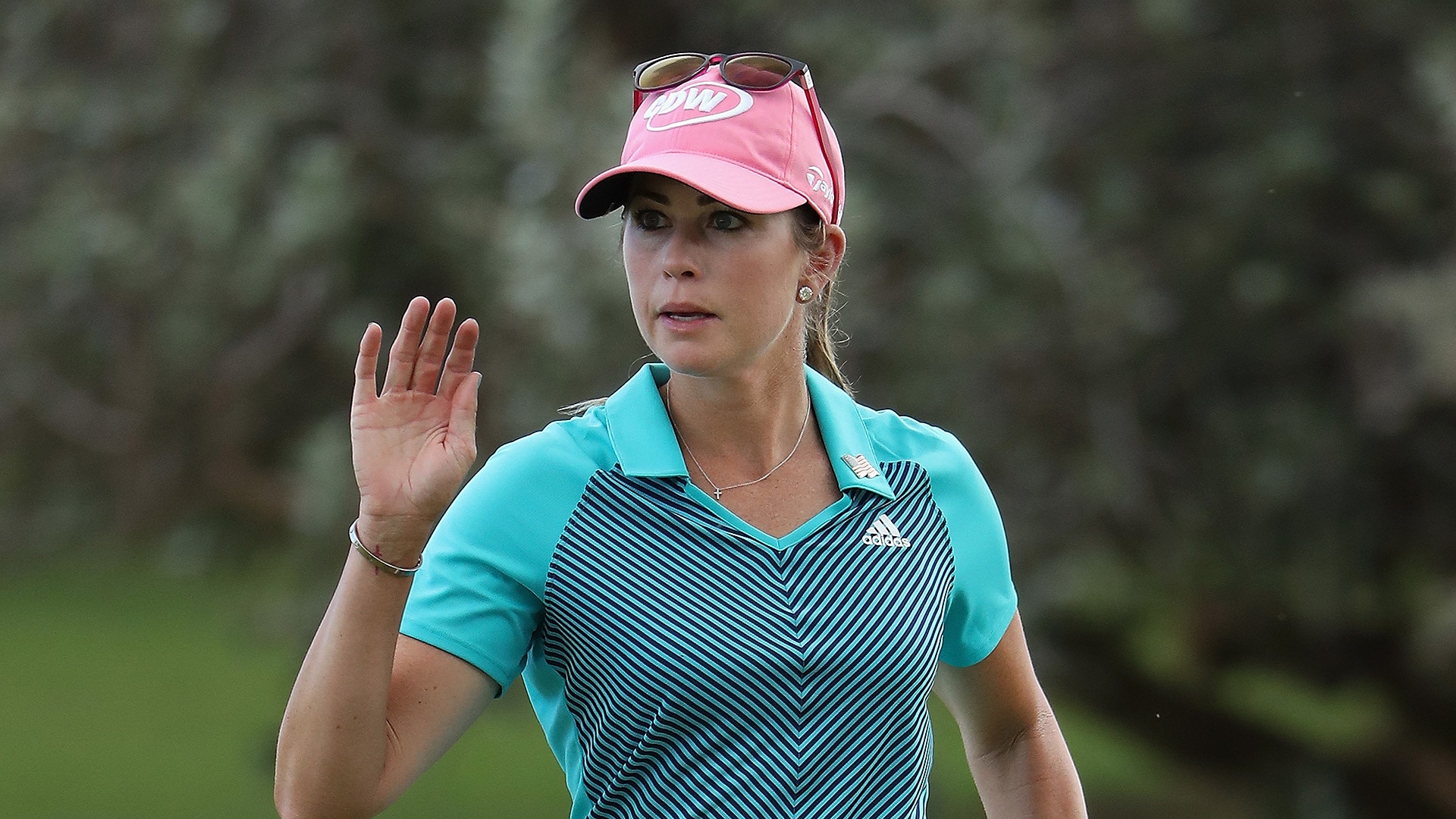 KAPOLEI, Hawaii - A funny thing happened in sunny Hawaii while waiting for someone to break away from a pack of leaders in the opening round of the LPGA Lotte Championship Wednesday.

Then Paula Creamer and South Korea's Mi Hyang Lee took over, bolting into first at 6-under 66. Both had seven birdies and a bogey, with Lee's coming on the final hole, in the dark.

Play was suspended with six golfers still on the course.

Lee, 24, made the cut just once in three previous starts at Ko Olina. She is ranked 51st in the world, with a win in 2014 after earning Rookie of the Year honors on the 2012 Symetra Tour.

Two of Creamer's 10 victories have come in Hawaii and she would surpass $12 million in career earnings with a win Saturday.

Her only bogey came on the 15th and she erased it with a tap-in birdie two holes later. She waited out the rain delay under the waterfall next to the 12th hole, sitting next to 2012 champion Ai Miyazato.

''You know, I played solid. I putted really well. I switched back to conventional-style putting. I've been left-hand-low for the last three years. This is my first week back doing that and using my line, and seems to be doing pretty good so far.''

Lizette Salas, Su-Yeon Jang, Beth Allen and Eun-Hee Ji shot 67 in the morning, when the wind came and went. Canadian Alena Sharp joined them in the afternoon, playing her final two holes after rain drenched the course and left puddles on the greens and in bunkers.

Photos: Best of Paula Creamer through the years

Salas, who played for the U.S. in the last two Solheim Cups, has fond and frustrating memories of Ko Olina. She fired a career-low 62 in the final round of the 2013 Lotte, but lost a playoff with Suzann Pettersen. They still share the tournament record of 19-under 269.

Salas played the back nine in 29 that day. She was 4 under Wednesday and finished with seven birdies. A pair of bogeys on the front nine kept her out of the lead.

''This week we really just tried to be aggressive from the get-go,'' said Salas, who broke 70 just twice in her first seven tournaments this year. ''I know this course pretty well and I've had some good success here, so being comfortable and confident coming in just really gave me that start that we've been wanting.''

She was not alone. Nearly half the field broke par on a day when the tropical breeze came and went, leaving a huge dark cloud over the course that let loose just before 4 p.m.

Leaders will come at Thursday's second round from very different directions.

Salas' only win came the year after she lost the playoff with Pettersen. Jang is playing on a sponsor exemption for the second time. She finished fifth last year. Ji won the 2009 U.S. Women's Open and was third there last year, but has never been in the Top 15 at Ko Olina.

Allen, 35, has never played Ko Olina before. She was a rookie on the LPGA tour in 2005, then moved around before becoming the first American to lead the Ladies European Tour Order of Merit last year.

''It was a great year for me,'' she said on TV. ''I thought I'd go back to the States and see what happens. I've taken my experience with all those wins and being in contention more and brought it here.

''At the end of the day it's golf. It's the same in every country. I thought I'd try it again on the LPGA.''

Sharp, 35, is coming off her best season, finishing 41st on last year's money list. She has played all six Lottes, with her best finish in her first, when she tied for 25th.

Second-ranked So Yeon Ryu, who won the year's first major two weeks ago, parred her last nine holes and shot 68. She can overtake top-ranked Lydia Ko with a win here.