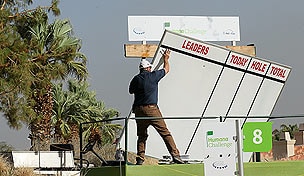 Getty Images
SHIMA, JAPAN - NOVEMBER 05: Eun-a Lim of South Korea plays a shot on the 9th hole during round one of the Mizuno Classic at Kintetsu Kashikojima Country Club on November 5, 2010 in Shima, Japan. (Photo by Chung Sung-Jun/Getty Images)  -

LA QUINTA, Calif. – When the wind knocked a big scoreboard into a lake and ripped a few trees out of the ground Saturday, Mark Wilson realized he really didn’t mind if he couldn’t finish his third round at the Humana Challenge.

Wilson and his fellow pros were more than happy to wait out the windstorm and just come back Sunday, when Wilson will attempt to maintain his momentum for what might be a marathon finish to the erstwhile Bob Hope Classic.

Wilson held a three-stroke lead over Ben Crane at 21 under when play was suspended play midway through the third round. Ferocious wind reaching 35 mph caused damage on all three courses, even interrupting former President Bill Clinton’s round with Greg Norman.

“I think they made the right call,” Wilson said. “You don’t want to see anybody get hurt.”

The pro-am tournament will resume third-round play Sunday morning without the amateurs. They’ll also attempt to finish the fourth round, which could be tough after the event’s first wind delay since 1999 - the first on the PGA Tour since 2009 in Houston.

Nobody was hurt by the wind at the Humana Challenge, even after an awning collapsed in the Bob Hope Square fan area. Conditions weren’t terrible on two of the tournament’s three courses, but several trees were toppled at the La Quinta Country Club course, making the decision easy.

“It’s really bad,” said Slugger White, the PGA Tour’s vice president of rules and competitions. “They’ve got a lot of trees down. It’s a real mess. … We knew (the wind) was going to be bad, but we thought it would be something we could play with, and then the bottom fell out.”

La Quinta didn’t even get the worst of the Coachella Valley craziness: A 66-mph gust was recorded at the Palm Springs airport.

White said he believes they can finish the four-round event Sunday “in a perfect world.” Wilson doubts it after vicious gusts interrupted a previously perfect weekend of Palm Springs weather.

Wilson got through the first eight holes at La Quinta under ideal conditions, but the light winds suddenly turned into gales. He battled to five straight pars before a birdie on his 15th hole of the day, but play was suspended moments later.

“It’s amazing how it happened so quickly,” said Wilson, who was 5 under through 15 holes. “I went from the mentality of making birdies to just making solid pars when I could.”

None of the 142 pros finished the third round, but nearly everybody was around the turn when the wind kicked up - blowing balls around the course, sending that large scoreboard into a lake on the Palmer Private course and causing mischief in the fan area. White said the grounds crews would use chainsaws to remove the fallen trees at La Quinta.

With tee times starting at 7:30 a.m. Sunday, White believes it might be possible to finish the event on time “in a perfect world.” Most players are staying in Southern California next week for the Farmers Insurance Open at Torrey Pines.

“I doubt it. I’ve done the math,” Wilson said. “I don’t know how they could get it done tomorrow, but if we do, I would love to get it done. More power to them.”

Clinton, who’s hosting the tournament, and Greg Norman had just hit their tee shots on the 10th hole of the Palmer Private course when play was suspended. A short time later, the scoreboard blew into the lake that’s flanked by the 10th and 18th holes, leaving oversized number placards floating in the water.

Wilson shared the lead after two rounds with Crane and David Toms, who dropped back to 15 under. Zach Johnson moved within four strokes of the lead after going 6 under through 13 holes.

“We knew there was wind in the forecast, but I’ve never really experienced anything like that,” Johnson said. “Not that quick and that fierce and that intense in that amount of time.”

Until the wind kicked up, extremely low scores had dominated the first two days. Robert Garrigus jumped into contention Saturday by making nine birdies in 13 holes on the Nicklaus Private course before play was suspended.

Garrigus joined John Mallinger and John Senden at 16 under, five strokes behind Wilson.

Sam Saunders, Arnold Palmer’s grandson, made a hole-in-one on the fifth hole of the Palmer course.