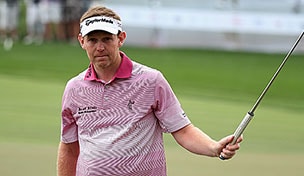 Getty Images
AUGUSTA, GA - APRIL 12: Paul Casey of England smiles after an eagle on the second hole during the final round of the 2015 Masters Tournament at Augusta National Golf Club on April 12, 2015 in Augusta, Georgia. (Photo by Andrew Redington/Getty Images)  -

DUBAI, United Arab Emirates – Defending champion Stephen Gallacher had seven birdies and an eagle on the back nine Saturday to surge past Rory McIlroy and take a two-shot lead into the final round of the Dubai Desert Classic.

Gallacher equaled the European Tour record for the lowest nine-hole score with an inward 28 for a 9-under 63. That gave him a 16-under total of 200, with McIlroy in second after 69.

Gallacher started with seven straight pars before a bogey on the eighth. But he birdied the next four holes before an eagle on the par-5 13th. After another par, he finished with four straight birdies.