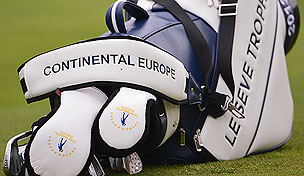 SAINT-NOM-LA-BRETECHE, France – Continental Europe made a solid start in the Seve Trophy with a two-point lead against Britain & Ireland after the opening-day fourballs on Thursday.

Europe, which lost the last six meetings and is trying to win the trophy for the first time since the inaugural contest in 2000, won three of the five pairings on a day of mixed weather conditions.

Nicolas Colsaerts and Gonzalo Fernandez-Castano finished the day by winning, 5 and 3, against Scottish pair Scott Jamieson and Marc Warren. Then Stephen Gallacher and Paul Lawrie beat veterans Thomas Bjorn and Miguel Angel Jimenez, 3 and 2, in the opener.

But Europe won the second and fourth matches when Mikko Ilonen and Thorbjorn Olesen beat Tommy Fleetwood and Chris Wood by a single hole and Gregory Bourdy and Joost Luiten won, 2 and 1, against Jamie Donaldson and David Lynn.

The third game was halved as Britain and Ireland missed a chance.

Ryder Cup player Paul Casey and Simon Khan were set to get a point for Sam Torrance's side, but Italy's Francesco Molinari birdied the last as he and Matteo Manassero earned a half for Jose Maria Olazabal's team.

After bright conditions early on, there was heavy rain in the afternoon.

Ilonen quickly got Europe back on track with three birdies on the front nine, and Olesen restored their two-shot lead with a birdie on the 13th hole after Fleetwood reduced the deficit with a birdie on 11.