Feng beats Lewis in China with eagle on 18 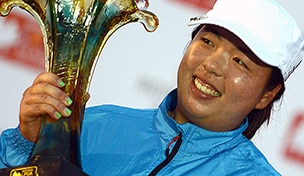 Getty Images
Derek Bohlen hits a golf ball in front on one the rocks on the course for Big Break Greenbrier.  -

BEIJING – China's Shanshan Feng eagled the par-5 18th hole after her approach shot hit the pin for a 68 Sunday and a one-stroke victory in the smog-affected Reignwood Classic, the LPGA's first tournament in Beijing.

American Stacy Lewis birdied four of her first six holes to quickly catch overnight leader Feng and led for most of the final round by one stroke before the Chinese golfer thrilled the local gallery with her late eagle after Lewis had putted out with a par.

It was Feng's second career victory – she won last year's Wegmans LPGA Championship, a tour major. She's had an outstanding 2013, making 14 cuts in 15 tournaments with six other top-10 finishes and earning $800,000.

No. 1-ranked Inbee Park of South Korea finished third, also after a 68 Sunday, five strokes behind Feng. Australian veteran Karrie Webb shot 67 and was fourth, another stroke behind.

Feng said that when she was going up the 18th, she thought Lewis would go for the green.

''So I thought maybe she's giving me a chance for playing off,'' Feng said. ''I never thought I would shoot the second shot so close that I could make eagle.''

Her approach to the green was on line for the pin, causing the gallery to erupt in cheers when the ball hit the flag and bounded several feet away.

''Suddenly I heard the noise, the crowd was excited, so I thought it must be good,'' she said.

Despite her first win being a major, Feng said Sunday's win in Beijing was as important.

''I would say I'm as happy as when I won last year,'' she said. ''It was our first time in Beijing, the tournament sponsor is also my sponsor. So I really wanted to do well to make them look good. I also broke my lowest score for four rounds, and gave it my best.''

For most of the tournament, the players couldn't escape the capital's notorious pollution – there was another smog delay of nearly three hours before the final round started Sunday. Germany's Sandra Gal was one of several players wearing surgical-style masks.

Six expressways were closed in the city due to reduced visibility Sunday and the U.S. Embassy in Beijing issued a warning that hazardous air quality readings meant American citizens should ''avoid all physical activities outdoors.''

American Jessica Korda, who led after the second round, had an even-par 74 Sunday after a 76 Saturday dropped her from the leaderboard. She finished the tournament in a tie for 15th, 16 strokes behind Feng.