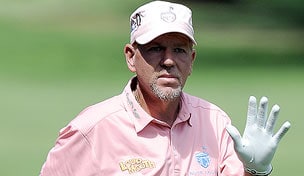 Getty Images
GUADALAJARA, MX - NOVEMBER 13: Sophia Sheridan hits her second shot on the 6th hole during the first round of the Lorena Ochoa Invitational at Guadalajara Country Club on November 13, 2008 in Guadalajara, Mexico. (Photo by Hunter Martin/Getty Images)  -

VANCOUVER, British Columbia – Bo Van Pelt held his finish after a perfect iron shot into the 18th green, lowering the club in time to acknowledge the generous applause after his ball stopped five feet below the hole.

It had become ho-hum stuff for Van Pelt in the third round of the RBC Canadian Open on Saturday.

Van Pelt birdied four of his last five holes, including the final two, to finish with a 65 and a one-stroke lead.

“If you are hitting every fairway and green after nine holes there is no way you should be over par,” Van Pelt said of his 1 over front nine.

Canadian Adam Hadwin, playing on a sponsor’s exemption, missed a 12-foot birdie putt on 18 to finish with a 68, and sit alone in second at 4-under 206.

Andres Romero (67) and first-round leader Kris Blanks (69) are tied for third, two shots back, after another tough day in the thick rough along the tight, tree-lined Shaugnessy Golf and Country Club.

Van Pelt, who had five-straight top-15 finishes before tying for 57th at last week’s British Open, was 1-over at the turn and mad at himself for leaving strokes on the course with poor putting. He hit every green—no easy task this week—but had a couple of three-putts and missed three “short” birdie putts.

But with no one else going low, Van Pelt calmed himself on the walk to No. 10.

The 36-year-old from Indiana did just that, starting with a birdie on the par-4 10th, another on the par-3 12th, and four on the final five holes, ending with a 5-foot putt after another beautiful approach on the tough par-4 18th.

With only 11 players still under par after three days of thick rough and narrow fairways, few expected to see anyone setting the nine-hole record at the 7,010-yard, tree-lined Shaugnessy Golf and Country Club. Van Pelt did it by keeping his driver in the short grass, and hitting 17 of 18 of the small greens.

“You never know you are going to shoot 29,” said Van Pelt, who used his driver for all but one hole on Saturday. “You have to drive it in play. If you drive it in rough, you can’t hit the green. I grew up on a tree-lined golf course with small greens, so from a visual standpoint, I like the looks of it.”

Like Van Pelt, Daly said the key was hitting his driver well.

“You have to,” said Daly, saying it at least gave him a chance to get to the small greens from the rough if he hit it further off the tee. “If you lay up you can t get to the green on your approach shots. You’ve just got to attack.”

Daly, playing just his 14th PGA Tour event this year because he now relies on sponsor’s exemptions, is trying to win for the first time since 2004, and hasn’t been in the top-10 since two runner-up finishes in 2005. He said he will be nervous Sunday.

Van Pelt played in front of sparse crowds Saturday. But there will be plenty of attention on the final pairing Sunday with local hero Hadwin.

The 23-year-old Hadwin tipped his cap and gave a wave to a raucous reception walking up the 18th green, and the roars continued long after he missed a 12-foot birdie putt and tapped in for par. For a second-year pro from the third-tier Canadian Tour, Hadwin appeared to be taking it all in stride as he tries to become the first Canadian since Pat Fletcher 1954 to win his national open championship.

“It’s indescribable,” Hadwin said of the reception. “It’s a very exciting feeling to have that many people behind you and cheering for you. If I keep doing what I’m doing they will have something to cheer for tomorrow.”

NOTES: Bud Cauley (68), Ryan Moore (67) and David Mathis (69) are all at 1-under, four shots off the lead. … No played has been in the 60s all three days, and only Ogilvy, Scott Piercy and Keegan Bradley don’t have a round over par, with the latter two, who are among five players at even par, both recording three straight 70s. … Top amateur Patrick Cantlay shot 68 to get to 1-over and into a tie for 17th as he looks to continue a streak that has seen him finish in the top-25 of all four PGA Tour events this season, including the U.S. Open.