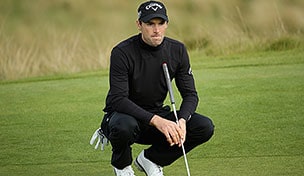 ST. ANDREWS, Scotland – Former Ryder Cup player Oliver Wilson boosted his chances of regaining his European Tour card by shooting an 8-under 64 Thursday to share the lead after the first round of the Alfred Dunhill Links Championship.

Wilson made the most of his sponsor's invitation by making one eagle and six birdies in bright but windy conditions on Kingsbarns. Fellow Englishmen Tom Lewis and Richard McEvoy also shot a 64, along with Mark Tullo of Chile and Alexandre Kaleka of France.

The players alternate between Kingsbarns, St. Andrews and Carnoustie over the first three rounds.

Wilson competed in the 2008 Ryder Cup at Valhalla but lost his tour card at the end of the 2011 season. He's been playing on the secondary Challenge Tour since.