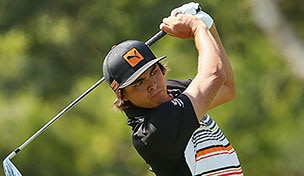 GOLD COAST, Australia – Rickie Fowler had six birdies over his last eight holes en route to an 8-under-par 63 Thursday to take a two-stroke lead after the first round of the Australian PGA.

Fowler's round took some of the attention from Adam Scott's first tournament back home since becoming the first Masters champion from Australia. Scott was two strokes back after shooting a 65 playing in the afternoon groups affected by gusty winds at Royal Pines.

Nathan Green shot 66 and was alone in fifth spot, a stroke better than Australian compatriot Jason Norris and South Korea's Kwon Sung-yeol, who shot 67s and were equal sixth. Richard Lee of Canada was in a large group tied for eighth with 68s.

Fowler started at the 10th and opened with five pars before making birdie on two of the next four holes before the turn.

''It was a good solid start,'' the American said. ''A little bit slow on my front nine, but I just stayed patient and finally got a few things to go, made a couple of good up and downs.''

Fowler said although the conditions were conducive to good scoring on Thursday morning, the situation could easily change. And it did.

''If the wind picks up this afternoon, like it started to pick up the last few holes, the course will dry out a bit and they'll play a little bit tougher, ''Fowler said. ''So tomorrow afternoon it's going to be a little bit different course than I saw this morning.''

Scott is making his first tournament appearance back home since winning the U.S. Masters in April, the first Australian to do so.