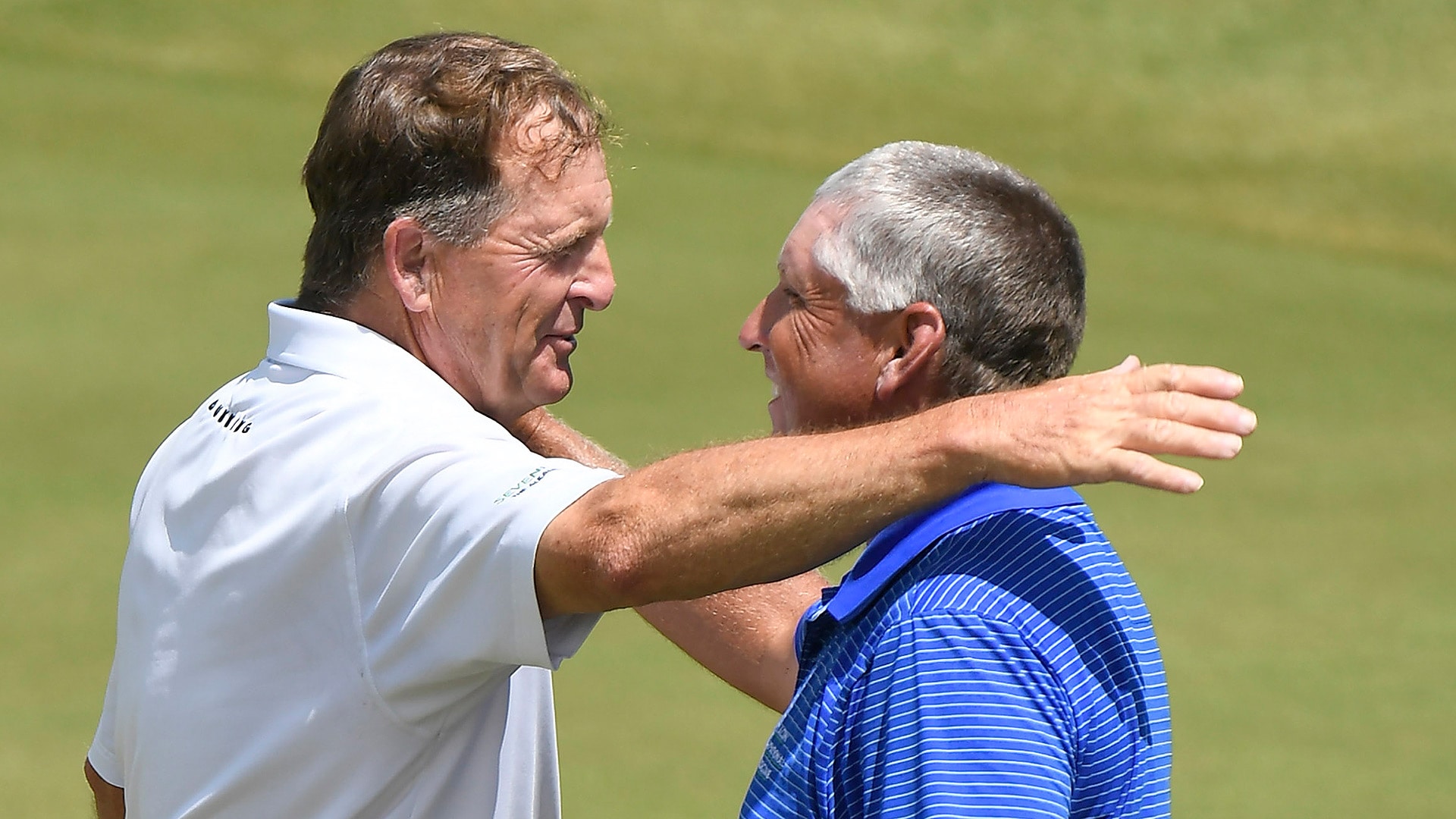 BIRMINGHAM, Ala. - Fred Funk shot a 2-under 70 on Saturday to hold on to the third-round lead at the Regions Tradition.

The 60-year-old Funk has a 14-under 202 and maintains a one-stroke edge over Scott Parel in the first of the PGA Tour Champions' five majors. Defending champion Bernhard Langer, who shot a 66, and Scott McCarron (69) are two shots back.

Funk was even over the final nine holes at Greystone and is seeking his first PGA Tour Champions individual title since 2012. Langer is bidding to match Jack Nicklaus' record of eight major victories on the 50-and-over circuit

Funk had a 67 and 65 heading into the weekend. He is 2-for-2 in winning after holding the 54-hole lead at PGA Tour Champions majors. He added two strokes for a three-shot win in the 2008 Regions Tradition and turned a one-shot advantage into a six-stroke victory at the 2009 U.S. Senior Open.

Each of the past five Regions Tradition winners have come into Sunday with the lead.

''I need to play like I did the first two rounds (Sunday), that's for sure,'' Funk said.

Players had a two-tee start early Saturday because of expected bad weather, and will do the same in the final round.

Parel gained entry after Fred Couples withdrew late last week and had a 70. He opened with three straight birdies, but dropped four strokes from holes 5-7, starting with a double bogey.

Parel rebounded from those troubles to start a four-birdie stretch on No. 9, followed by a bogey and a finishing string of pars.

Parel turned pro at 31 and went through Q-school in 2016. He's seeking to become the first Q-school medalist to win a 50-and-over major since Allen Doyle at the 1999 Senior PGA Championship.

Parel is making a strong impression on his fellow contenders.

Langer has been in the 60s all three rounds after staying in that range all four days last year.

He birdied the first three holes and four of five. He made a long birdie putt on No. 17, raising his arms in the air and pumping his fist.

''Just drove it good, hit a lot of greens, hit it pretty close,'' Langer said. ''Made one bad shot really all day and that was the bogey on the par 3 (No. 14) that I missed, but otherwise it was a very solid and encouraging round of golf.''

Toms, a PGA Tour Champions rookie, had an eagle on the fifth hole and three birdies on the back nine.

''I holed out twice, once from the fairway, and chipped in once, so that helps a lot,'' Toms said. ''But I missed a lot good opportunities, too. So it was just a solid round of golf. I drove it good and gave myself a lot of chances.''

John Daly, fresh from winning the Insperity Invitational, shot a 76 and is 2 over.