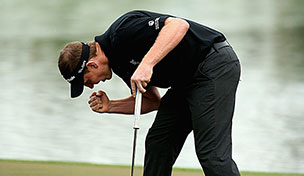 Gallacher fought back after four bogeys over his opening eight left him in a five-way tie for the lead after 11 holes.

He won the 25-year-old tournament with an overall 16-under 272 for only his third victory in 18 years and 431 events on the European Tour.

Grillo secured his best Tour finish with an overall 15-under 273 when he eagled the last hole for a round of 66.

Frenchman Romain Wattel also shot a 66, including birdies on the last two holes, to finish tied in third on 14-under 274 with Brooks Koepka (70) of the United States.

Rory McIlroy struggled with a 74 to finish tied for ninth while top-ranked Tiger Woods (71) birdied his closing three holes for a share of 41st with a 6-under 282.

The 39-year old Gallacher eventually broke clear of the logjam atop the leaderboard to birdie Nos. 13, 16 and 17 before a regulation par at the last.

''It took everything I had to win today especially after the start I had when I bogeyed the first two holes,'' Gallacher said. ''The good thing is that I was fortunate that no one was running away with the tournament ... The turning point came at 11 when I holed a nice putt for birdie.''

Victory will lift Gallacher 30 places in the next world rankings to 37th and a place in the four Majors this year.

McIlroy began the last day two shots behind playing partner Gallacher but was 2 over after 10 holes before the first birdie of his round at the 11th.

The Northern Irishman then bogeyed the 12th and 13th before only his second birdie of the round at No. 17.

''On the rare occasions I got the ball close, I didn't make any putts, so it was one of those days,'' McIlroy said. ''I thought if I could get to 16 under it would be good enough and it turned out that it was as that's what Stephen got to. I just wasn't able to play well enough to get there. It was just one of those days. Anything that could go wrong, did.''