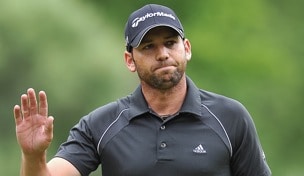 Getty Images
JERSEY CITY, NJ - AUGUST 29: Fredrik Jacobson of Sweden plays his second shot from the 12th fairway during round three of The Barclays on August 29, 2009 at Liberty National in Jersey City, New Jersey. (Photo by Kevin C. Cox/Getty Images)  -

MUNICH – Sergio Garcia says destiny will determine whether he will play at the British Open next month after edging closer to qualification at the BMW International Open on Saturday.

Victory or second place in Munich would earn Garcia a place at Royal St. George’s. But after finishing his third round just two shots behind English leader Mark Foster thanks to a 64, he believes he would have achieved only half of the job.

The Spaniard insists he will not alter his lifestyle to ensure his presence on the first tee at the British Open.

“Everybody knows that The Open is my favorite event so I would not enjoy missing it,” he said.

“I’ve said it before. Obviously I’m not going to jump off the roof, and I hope that nothing happens, but I am going to do what I love doing.

“If I’m not meant to play The Open, even if I qualify, then I won’t play, something will happen.

“Even if I stay in bed, something could happen that will make me not play in The Open.

Garcia revealed he was going to play a football game Monday.

“Golf is not the only thing I have in life, and I’m very thankful for that,” he said.

“If I’m meant to get injured, I mean, I’ve injured myself playing golf before. So you can’t control those kind of things.”

Garcia missed an eagle on the 11th, and a bogey on the 17th prevented him from leading going into the final round, but he was nevertheless satisfied.

“It was a huge round for us,” he said. “We knew that we needed to do something important to have a chance of getting to the British Open.

“I’m a little disappointed with the bogey on 17. It looked like a birdie, but unfortunately we made bogey. But other than that, I think it was very nice.”

Foster birdied four of the last seven to establish a two-shot lead at the top of the leaderboard, but he knows he will have to do equally well on Sunday to emerge victorious.

“I know exactly what’s ahead,” he said. “You’re in the lead, you’re two thirds of the way there, but I’ve been on both sides, the ecstasy of winning and the horrible feeling when it goes wrong and you’re flying home.

“I know I’ve got to shoot a positive score tomorrow.

“If I shoot anything around par, I won’t win the tournament. That speaks for itself.”

Lee Slattery (66) could have tied for second with Garcia, Robert Coles (65), George Coetzee (70), Retief Goosen (67) and Pablo Larrazabal (69) had he not temporarily forgotten that the preferred lies rule had been lifted.

“I hit a nice 4-iron off the 16th tee, just laying it up, and stuck my tee in the ground and my caddie shouted ‘No!’ and as he shouted, I was picking the ball up,” he explained.

Nevertheless, the Englishman made amends.

“It was a little bit unfortunate, but I chipped in straight after it,” he reported.

Matteo Manassero is not out of the running either after a 66 left him on 10 under.

“Obviously I need to make another round like this, like I had today, and hope,” said the Italian.

“But I’m very happy about this round, and if I’ll be able to shoot another one like this, it will be great.”

Meanwhile, a nine on the 11th after finding water saw the joint overnight leader Henrik Stenson fall out of contention, but he recovered with three birdies to the 18th, leaving him on 9 under, while a level-par round of 72 left home favorite Martin Kaymer eight strokes adrift of the lead.