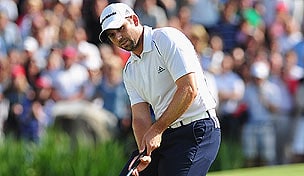 Getty Images
DOHA, QATAR - JANUARY 22: Robert Karlsson of Sweden during the first round of the Commercialbank Qatar Masters at the Doha Golf Club on January 22, 2009 in Doha, Qatar. (Photo by Ross Kinnaird/Getty Images)  -

Larrazabal made his short put on the par-5 18th after Garcia missed from about 5 feet to add to his victory at the Alstom Open de France title in 2008.

“I had nothing to lose,” Larrazabal said. “If you tell me who you want to beat in a playoff, then I would say first Tiger Woods and then Sergio. I have a lot of respect for Sergio, he is one of my heroes. He is still for me one of the best players in the world; he’s one of the top five when he’s in form.

Both players have now qualified for the British Open at Royal St. George’s at Sandwich next month. Their prize money won putting them top of a money list from six European Tour events, starting with the BMW PGA Championship and ending in Munich.

“I think my game is the type of game for the Open,” Larrazabal said. “When we played the first hole of the playoff, we congratulated each other.”

There was nothing between them for four playoff holes, matching each other’s score at No. 18 twice, No. 12 and No. 17 before playing the last hole for the fourth time Sunday. Garcia sent an eagle attempt four feet beyond the hole and missed his birdie chance.

Garcia’s started steadily with five pars but, having relinquished the lead, a long eagle putt on No. 9 took him back into a share of the lead at the turn.

He picked up seven shots in six holes up to No. 11, which he eagled to move two shots ahead of Larrazabal, who bogeyed No. 13.

Garcia, however, then made three straight bogeys from No. 12 for Larrazabal to cut the lead.

“Pablo and I played some great golf in the playoff. It is a pity one of us had to lose,” Garcia said. “But seventh at the U.S. Open and second now, this shows that my game is coming around.”

Kaymer will drop out of the top three when the golf rankings are published Monday, allowing U.S. Open winner Rory McIlory of Northern Ireland to rise to third behind English pair Luke Donald and Lee Westwood. It will be the first time that the top three has been filled by players from Britain and Ireland.