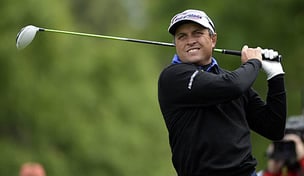 PONTE VEDRA BEACH, Fla. – Scott Gardiner of Australia had a 5-under 65 and wound up with the lead Saturday in the Web.com Tour Championship when Chesson Hadley stumbled at the end.

Gardiner has played well enough in this four-tournament series that determines PGA Tour cards that he already has locked up his return to the big leagues. A win would give him top status and a spot in The Players Championship.

Hadley, who also has secured his card through Web.com Tour regular-season money list, had a two-shot lead for most of the third round on the Valley Course at the TPC Sawgrass. But he bogeyed the 17th, and then took double bogey on the last hole for a 70 that left him one shot behind with Joe Durant (68).