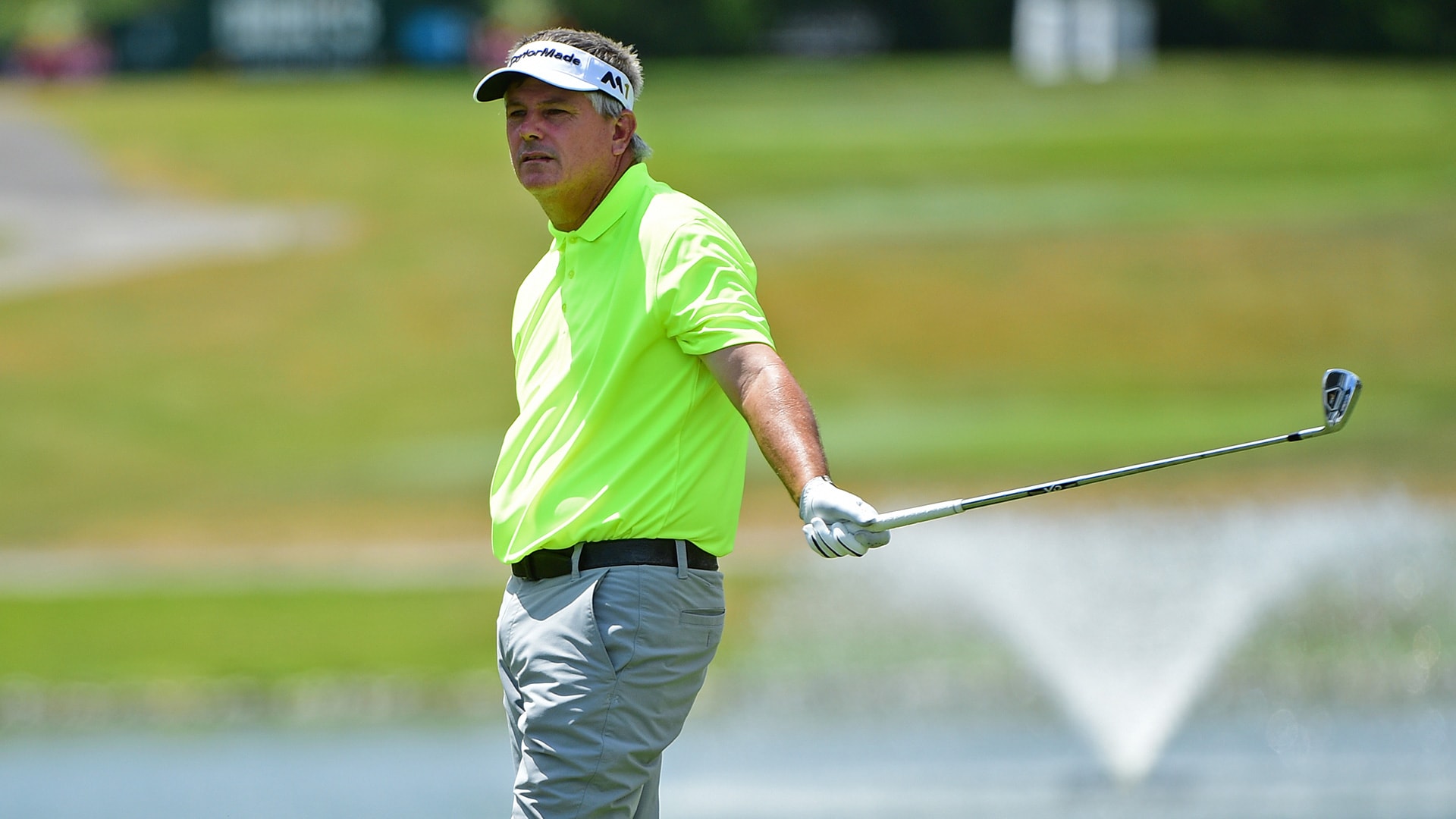 ENDICOTT, N.Y. – John Riegger wasn't sure he'd be able to play the second round of the Dick's Sporting Goods Open because of a lingering case of shingles. The pain subsided long enough for him to show his first round wasn't a fluke.

''It's kind of gone away, but the pain is still there and it's just an after-effect of the attacks of the nerves,'' Riegger said after his second straight bogey-free round. ''I think it's just the fact that I've gotten used to it and dealing with it a little bit better. I know that nothing's going to happen to me.''

John Daly and Stephen Ames shot 68 and were tied for sixth at 8 under with Bart Bryant (70), who is trying to become the first repeat winner of this Champions Tour event since its inception in 2007.

Riegger thrived on the four par-5s on the narrow, tree-lined course. On Saturday, he birdied two of the three on the front side and eagled No. 12, the final par 5.

This will be the first time Riegger has had the lead, or a share of it, entering the final round of a Champions Tour event.

''I'm just trying to hope that I wake up tomorrow and I feel all right and I can play,'' he said.

Goydos had four birdies and two bogeys on the front nine. But after another bogey on the back side he finished with a flourish - birdie at the tough par-4 15th hole that's guarded by an imposing water hazard, eagle at the par-4 16th hole, and birdie at No. 17.

''You go from 7 under to 11 under, I'm still stunned a little bit myself,'' said Goydos, who drove the green at 16 to set up the lone eagle at the hole over two rounds. ''If you had strokes gained with lucky bounces, I would be leading that right now by a large margin.''

Daly, who turned 50 in April, is making his seventh Champions Tour start. It's his first appearance at En-Joie since the 1995 B.C. Open on the PGA Tour. He won there in 1992 and the gallery hasn't forgotten.

''It helps, and it always helps when you're playing good, you feed off of it,'' Daly said. ''A lot of times when things aren't going good, the fans kind of pump me up to keep hanging in there.''

''I just remember that when I did win here, I felt comfortable off the tees, although it's not showing this week,'' he said. ''I feel like I can hit the fairways, but I'm just not executing a lot of them.''

Short started strong, notching four birdies and an eagle over the first 11 holes before a three-putt par at No. 12. The 52-year-old Texan finished with seven straight pars.

''Anytime you can be close going into the last nine holes, that's what you really want - to have a chance to win it,'' he said.

Jeff Maggert won this tournament last year, beating Goydos by two shots. Nobody will have to worry about Maggert this time. The defending champion was at 1 under and out of contention.