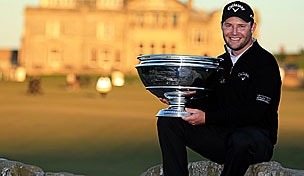 ST. ANDREWS, Scotland – Branden Grace won his fourth European Tour event of the season Sunday by shooting a 2-under 70 to protect his lead and win the Alfred Dunhill Links Championship by two shots.

The South African led from the first round and finished with a 22-under total of 266 to hold off Thorbjorn Olesen of Denmark, who finished second after a 68. Alexander Noren of Sweden (69) was another two shots back in third.

''It's just awesome to win an event at St. Andrews as I have really dreamt of this moment all my life,'' said Grace, who shot a first-round 60 at Kingsbarns.

Another South African, George Coetzee, equaled the Old Course record that had been set Thursday with a 10-under 62 for a share of fifth place.

The 24-year-old Grace is the youngest winner of the tournament, and his $800,000 prize moves him to third in the Race to Dubai money list.

Grace arrived in Scotland ranked 49th but will now make the top 40 when the rankings are adjusted Monday.

Olesen kept the pressure on Grace throughout the day. Grace regained control with three straight birdies from Nos. 12-14, including a 10-foot putt at the 13th.

Grace became the first player in the 40-year history of the tour to win his first four events in the same season.