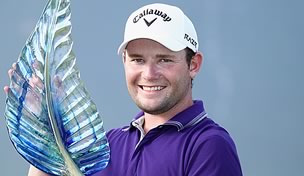 Grace birdied the first playoff hole at The Links at Fancourt - the par-5 18th - to claim his second consecutive victory on the European Tour, having won last week’s Joburg Open. Both Els and Goosen parred the hole.

The three players had finished the final round in a tie on 12-under 280.

“It’s awesome. It’s been amazing, and it’s nice to sit here again on a Sunday afternoon as I did last week,” said Grace, who had earlier missed a 3-foot putt for birdie on the 18th in regulation play that would have secured victory.

“You know you’ve got a 3-footer and if you make it you’re a hero. I didn’t think I hit a bad putt, to be honest. But the confidence from last week played an important role. I was lying in bed the night before the final round reading a couple of articles and saw that there were seven players with 13 majors chasing me. I thought it’s a big field behind me. But I just stuck to what I was doing.”

Grace’s victory was all the more satisfying because sponsors initially asked him to play as a marker in the 35-man field, before his victory in the Joburg Open saw him qualify automatically.

“I guess I would’ve definitely come in any case but fortunately I won and got myself in, and managed to finish it in the end,” Grace said.

The final round featured several lead changes before ending with three players at the top of the leaderboard.

Els set the mark in the clubhouse at 12 under after a sublime round of 67, including a birdie at the last.

Goosen then birdied three of the final four holes to also finish on 12 under with a 70.

That left Grace and Nicolas Colsaerts out on the course. Both arrived on the 18th also on 12 under.

Colsaerts hit a wayward drive and eventually missed a 4-foot putt for par to stay in the playoff, instead finishing on 11 under with a 72.

Grace, meanwhile, missed the chance to claim victory on the last, but made no mistake in the playoff.

“Standing on the tee with Ernie and Retief in the playoff was unbelievable. I was very calm though. It’s one of those awesome things to know I’ve beaten two of my idols in a playoff.”