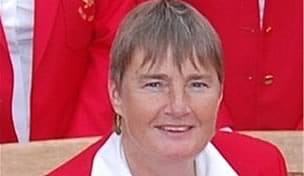 ST. ANDREWS, Scotland – Sue Turner, the manager of Britain and Ireland’s Curtis Cup team and a leading figure in women’s golf in Britain, has died. She was 50.

Turner was due to manage Britain and Ireland’s female amateurs in the Curtis Cup against the United States from June 8-10 at Nairn, Scotland.

“Whilst Sue will not be there now in person, I know she will be there watching us and we will be doing everything in our power to make her proud,” Tegwen Matthews, Britain and Ireland’s Curtis Cup captain, said Wednesday.

Renowned for spotting, nurturing and motivating talented young players, Turner was a popular and respected captain and manager of international teams.

She played for, captained and managed Wales in international matches against other British nations in the past three decades, with the R & A describing her as “without doubt the most successful captain of the Welsh ladies’ international team.”

Turner captained Britain and Ireland to victory in the quadrennial Five Nations Trophy against Australia, Canada, New Zealand and South Africa in 2007. She also captained the under-16 team in the inaugural Junior Vagliano Trophy match against the Continent of Europe last June in Wales.

“Her enthusiasm and love of life were infectious and permeated through every team she worked with. She gave us so much and had so much more to give. Many players in both the amateur and professional game owe a huge debt of gratitude to Sue.”