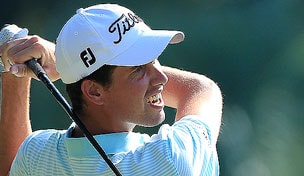 Getty Images
25 NOV 1995: JOHN DALY OF AMERICA HAVING A CHAT WITH GREG NORMAN TODAY DURING THE THIRD ROUND OF THE 1995 HEINEKEN AUSTRALIAN OPEN AT THE KINGSTON HEATH GOLF CLUB ,MELBOURNE ,AUSTRALIA. Mandatory Credit: Phil Cole/ALLSPORT  -

PONTE VEDRA BEACH, Fla. – Chesson Hadley and Andrew Svoboda did well enough Friday to think about a return to Sawgrass next May.

Hadley had six birdies in his round of 4-under 66 on the Valley Course at the TPC Sawgrass to take a two-shot lead over Joe Durant going into the weekend at the Web.com Tour Championship. Svoboda had a 67 and was among those three shots behind. The leader of the special money list from the four tournaments that determine PGA Tour cards are exempt into The Players Championship on the Stadium Course.

Durant had a 67 to boost his bid at earning one of 25 tour cards available. Hadley already is assured his card from finishing third on the Web.com money list in the regular season.