Hatton two back after striking fan with shot ST. ANDREWS, Scotland - Tyrrell Hatton bounced back from a poor start, including a wayward tee shot that struck a spectator on the head, to register a 2-under 70 and move within two strokes of the first-round lead at the Dunhill Links Championship on Thursday.

A female fan was pictured bleeding from a head wound after being hit by a drive from defending champion Hatton on the 15th hole at Kingsbarns, one of three courses staging the event.

The English golfer spoke to her when she returned to her feet after receiving treatment, and she was later seen walking to a golf cart and smiling as she was taken to an on-site medical center.

The incident took place less than a week after a spectator was struck by a tee shot by Brooks Koepka at the Ryder Cup. According to French media reports, doctors say she has lost sight in one eye and is considering legal action.

Hatton bogeyed that hole - his sixth of the day after starting at No. 10 - following bogeys at Nos. 11 and 13, but he eagled the 16th and made four birdies on his back nine.

Marcus Fraser of Australia and Matt Wallace of England shot 68s in high winds at Carnoustie and St. Andrews, respectively.

''It was brutal out there,'' Fraser said. ''Doesn't really matter if it's into the wind or downwind, and then you get the cross-breeze off eight and nine. That's as strong as I've played the golf course, I think.''

All 168 players in the field will play a round on each course, before the final round takes place at St. Andrews on Sunday.

Hatton is one of two European Ryder Cup-winning stars playing at the Dunhill Links. The other, Tommy Fleetwood, shot 71 at Kingsbarns.

Only 24 players broke par in the tricky conditions. 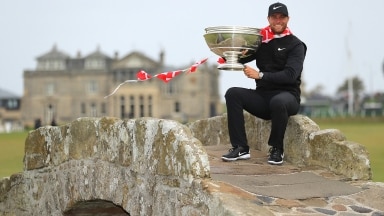 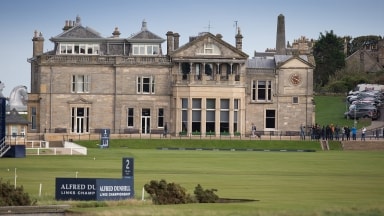 Shotgun start for final round at St. Andrews

The final round of the Alfred Dunhill Links Championship will begin at 8:30 a.m. local time Sunday in Scotland via a shotgun start.