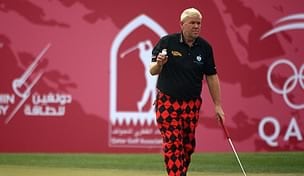 Getty Images
AVONDALE, LA - APRIL 23: Martin Flores stands on the 4th fairway during the second round of the Zurich Classic at TPC Louisiana on April 23, 2010 in Avondale, Louisiana. (Photo by Chris Trotman/Getty Images)  -

DOHA, Qatar – European Tour officials reduced the Qatar Masters to 54 holes when they called off play on Friday after strong winds moved golf balls and damaged the course.

Officials initially suspended play at 9:13 a.m. local time after gusts of up to 25 mph, and with signs being tossed about safety became an issue. They were hoping to resume play at 1:15 p.m. but with no sign of a respite, they called play just before 2 p.m. Play will resume on Saturday. No restart time has been announced.

About 66 golfers had started the second round in Doha before the suspension, and most seemed relieved to leave Doha Golf Course.

Lee Westwood, who missed the cut last year and was 1 over for the tournament through six holes on Friday, had already shifted to cheering on England’s cricket team against Pakistan in a test in Dubai.

“No play today!,” Westwood tweeted. “If I’m quick I might just get back to the hotel to see the end of England’s innings! It’s a good 15 mins back!”

First-round leader Gonzalo Fernandez-Castano dropped two shots on his first five holes to fall to 4 under through seven holes.

John Daly, who was yet to start his second round, was the clubhouse leader after his 5-under 67 on Thursday. A stroke behind were Fernandez-Castano, Jason Day (par through 6) and K.J. Choi, yet to start.

Meanwhile, Jose Manuel Lara of Spain, who shot 9-over 81 on Thursday, withdrew on Friday with a bad back.