Hello, Dubai: Wie tries to end year on a high 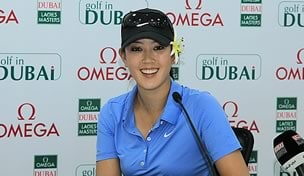 Getty Images
CARNOUSTIE, SCOTLAND - OCTOBER 09: John Parry of England plays off the third tee during the third round of The Alfred Dunhill Links Championship at the Carnoustie Golf Links on October 9, 2010 in Carnoustie, Scotland. (Photo by David Cannon/Getty Images)  -

DUBAI, United Arab Emirates – Hindered by injuries and tinkering with her swing, Michelle Wie is looking end her season on a high in Dubai.

The 22-year-old American has fallen to 17th in the world rankings after spending much of 2010 in the top 10. And with only two second-place finishes this season, she called this year “a work in progress.”

“I had a couple of good finishes. But it is frustrating just because sometimes weeks didn’t go my way, but at the same time you learn every week,” said Wie, who struggled with a back injury toward the end of 2010.

“Every week I gave it my all and as frustrated as it can be, I try to take a positive from it, and I feel like I improved quite a bit,” Wie said. “Whether or not my results show it or not, I’m feeling like I’m getting healthy again with my body. My body feels pretty good.”

Wie is among the biggest names at the Dubai Ladies Masters, the season-ending Ladies European Tour event which starts Wednesday. Lexi Thompson, the 16-year-old American who became the youngest winner on the LPGA in September, is expected to challenge alongside several top Europeans, including Anna Nordqvist and Sandra Gal.

Like Tiger Woods, Wie has responded to her poor performance with tweaks with her swing.

“I had a couple of swing changes, but just overall working on my game,” Wie said. “Obviously when you do try to work on something, the results sometimes don’t come as quick as you want them to. But like I said, I worked on a lot of things this year, not particularly one in specific, but hopefully it’ll pay off next year.”

Wie dismissed claims by Hall of Famer Annika Sorenstam that her pursuit of a communications degree at Stanford University was hurting her game. She said she has always worked to balance school and golf and insisted she has even more time now to practice than she did in high school.

Since she was child, Wie has been in the spotlight for her golfing prowess. She became the youngest golfer to play a U.S. Golf Association amateur championship at 10 and, as a big-hitting teenager, decided to take on the men. However, she never made the cut at a PGA Tour event and joined the LPGA in 2009, where she has won twice.

This year, Wie has often found herself overshadowed by No. 1-ranked Yani Tseng and more recently Thompson, who has become a media darling since her five-stroke victory at the Navistar LPGA Classic in September. That, however, hasn’t seemed to be bother Wie, who insists she will be back on top.