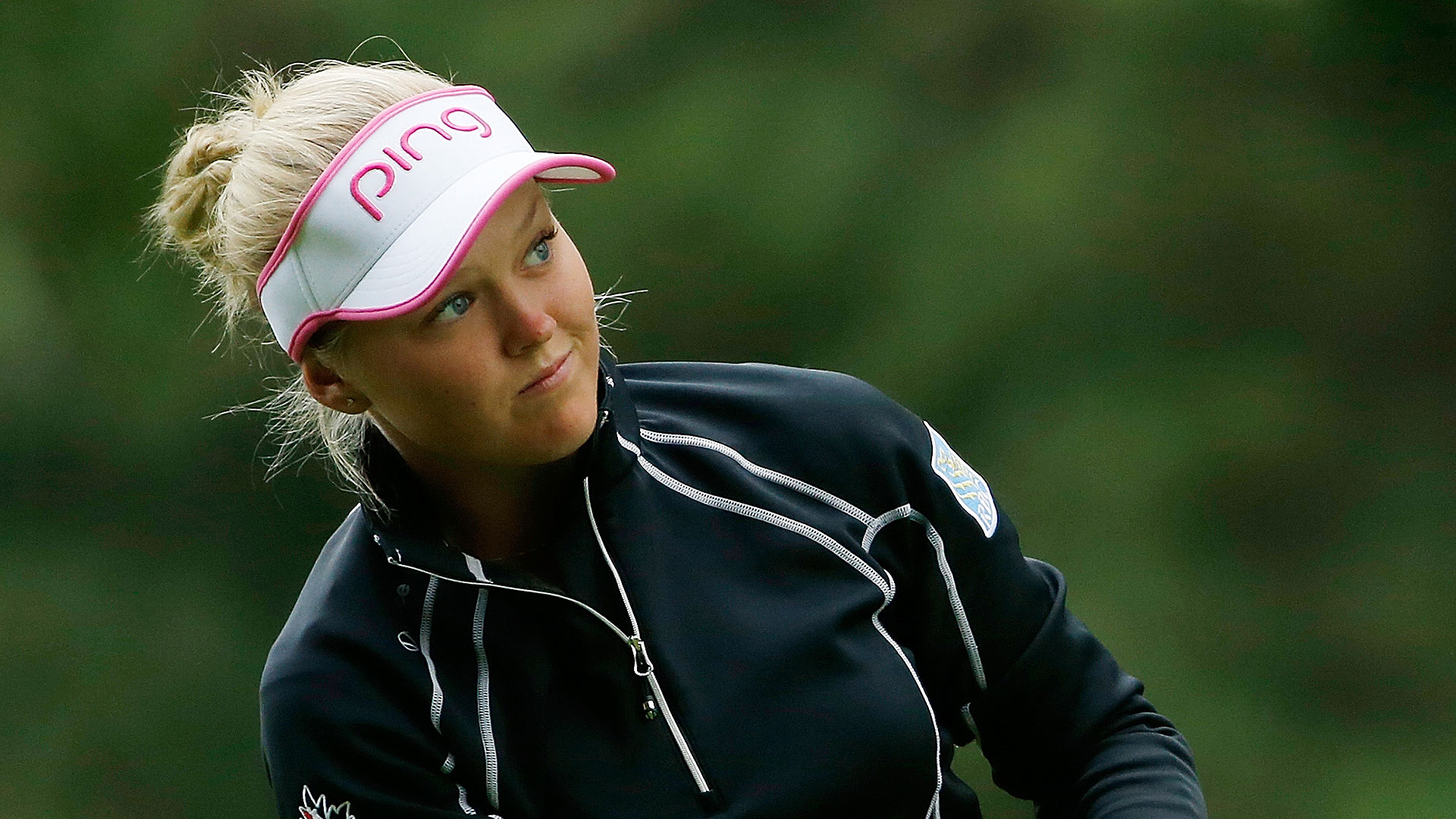 PORTLAND, Ore. - Brooke Henderson grew up toward the eastern part of Canada in Ontario, but the Pacific Northwest has quickly become a favorite of the budding 18-year-old star.

She continued her mastery of Columbia Edgewater Country Club, shooting a 70 Saturday to take a two-stroke lead into Sunday's final round of the Cambia Portland Classic.

Henderson, who claimed her first LPGA win a year ago in Portland, was at 13-under 203 heading into the final round. She leads Colombia's Mariajo Uribe, who was 11-under after a 71.

Henderson, who earned her LPGA Tour card shortly after winning last year's Portland event, was bidding for her third career win, all in the Northwest. Three weeks ago, Henderson rallied to win the Women's PGA Championship at Sahalee in Sammamish, Washington.

Henderson has shared or held the outright Portland lead the past six rounds. She was aiming to become the first back-to-back Portland winner since Annika Sorenstam in 2002-03.

All wasn't well Saturday for Henderson, who shot 69 or better in each of her first seven Portland Classic rounds at Columbia Edgewater, including last year's Monday qualifier. Though she had four birdies, she was often scrambling to make par, and her card included a double bogey.

''I played pretty awful today. Definitely want to play better tomorrow. I mean, I hit a lot of good shots. I just didn't capitalize on my chances. That was the first 12 holes for me,'' Henderson said.

Norway's Suzann Pettersen, tied for the lead with Henderson after the second round, faded to 9-under following a 74. Pettersen was the only player among the top 15 players who didn't break par Saturday. Also at 9-under was 2014 Portland champion Austin Ernst following a 69.

Pettersen was bidding to become the Portland Classic's second three-time winner, joining Nancy Lopez (1985, 1987, 1992). Pettersen has history in Portland, rallying during the final round to win the 2011 and 2013 tournaments. In 2011, Pettersen erased a nine-stroke deficit on the final day to beat Na Yeon Choi in a playoff.

American rookie Lee Lopez was 8-under after a 69.

No. 9 Stacy Lewis was six strokes back at 7-under after shooting 67, the day's second best score. Cheyenne Woods, whose best finish in two years on the tour was a tie for 24th, was also 7-under following a 69, as was Carlota Ciganda after shooting 70.

Scotland's Catriona Matthew was 6-under after a 66, the day's low round. Matthew had a bogey-free card that included an eagle at the par-5, 463-yard seventh. Brianna Do (70) and Angela Stanford (72) were also 6-under.

Henderson said the golf course ''has changed so much since Friday morning ... it's so firm and fast right now.'' But Henderson says she doesn't plan to dramatically alter her strategy for Sunday's final round.

Henderson, tied for the second round lead with Pettersen after two rounds, opened up a two-shot advantage over Uribe at the turn with a front nine of 2-under 34. Pettersen struggled, closing the front nine with back-to-back bogeys to fall four strokes behind Henderson.

The tournament's complexion changed at the par-3, 160-yard 13th, when Henderson and Uribe each hit their tee shots in the water and made double bogey. Pettersen suddenly was back in it, trailing Henderson by just a shot.

''I didn't take my time on the tee shot...I just mishit it,'' Henderson said.

But Henderson collected herself and made four pars and a birdie, at the par-3 16th, during her final five holes.

Uribe was looking for her first LPGA Tour win. In her sixth year on tour, Uribe's best finish was third at the 2015 Manulife Classic. The last Colombian to win an LPGA event was Marisa Baena in 2005.

''It would mean a lot to win. This year has been a little tough one me. The results haven't come. Tomorrow, I'm going to think on my game, shoot a low round. I love playing with Brooke and she's been playing so good,'' Uribe said. ''If I win, I want it to be because I shoot a really good round, not because anyone else struggles.''

Vicky Hurst shot 70 and was among four players at 211.

Mariah Stackhouse, the Stanford four-time All-American making her professional debut is 2-under after a 71, as is 2012 Portland champion Mika Miyazato, who shot 70.