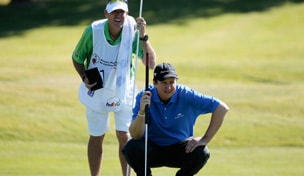 Getty Images
DUBLIN, OH - OCTOBER 03: A squirrel is seen on the shoulder of Tiger Woods of the U.S. Team during the Day One Four-Ball Matches at the Muirfield Village Golf Club on October 3, 2013 in Dublin, Ohio. (Photo by Matt Sullivan/Getty Images)  -

LAS VEGAS – J.J. Henry made a 50-foot eagle putt from the fringe on his final hole Thursday for an 11-under 60 and a one-stroke lead in the Shriners Hospitals for Children Open.

Henry also had nine birdies in perfect conditions at TPC Summerlin en route to the lowest round of his career. The two-time PGA Tour winner broke the course record and was a shot off the event mark of 59 set by Chip Beck in 1991 at Sunrise Golf Club.

''I finally made some putts,'' Henry said. ''I've always felt like I've been a pretty good ball-striker, and when I make some putts I seem to climb the board.

''And I obviously hit a lot of good ones today and hit some close ones, but it was nice to make a couple of those ones, especially that last one for eagle on nine, my 18th hole. I'm just trying to get it down there somewhere and obviously kind of tap it in, but it's always a bonus when those things go in.''

''Obviously, this is the kind of week you (have to) shoot some low scores,'' Henry said. ''And obviously (there) is a long way to go, but it's nice to get one early in the tournament and see if you can kind of build on it. You (have to) shoot somewhere in the low to mid 20s (under par for 72 holes) to probably have a chance to win, and I think the golf course is going to be there.''

Argentina's Andres Romero was second. He had two eagles in a 61, also his lowest PGA Tour score.

''I was focused on my game and I was trying to do my job, and that's all,'' Romero said. ''I feel very good and focused on the game and on every shot. So I wasn't paying attention to the leaderboard and the other guys.''

James Driscoll, Jonathan Byrd and Jeff Overton shot 63. Driscoll eagled the ninth, and Overton had an eagle on his opening hole -the 408-yard, par-4 first.

Zach Johnson, the highest-ranked player in the field at No. 11 in the world, opened with a 69. Defending champion Ryan Moore also shot 69.

Jimmy Walker, the winner of the season-opening Frys.com Open last week in California, had a 71.