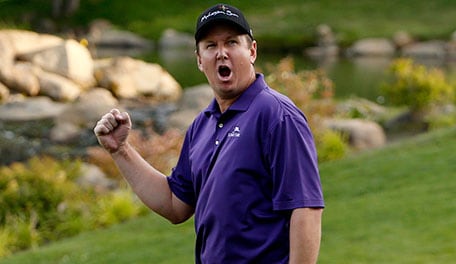 RENO, Nev. – J.J. Henry won the Barracuda Championship for the second time in four years Sunday, beating Kyle Reifers with a 15-foot eagle putt from the fringe on the second hole of a playoff.

After Henry holed the left-to-right breaking putt on the par-5 18th, Reifers missed a 10-footer.

''I knew obviously playing here that it's kind of coming down the mountain, if you will, from the front of that green. I knew there was a good chance the ball would get to the hole if I got it on line, and that's exactly what I did. It went right in the middle of the hole.

''I don't know how athletic I looked when I jumped up for joy, but it's a heck of a feeling when you make a putt like that. When you do it to win on the PGA Tour is even that much more special.''

The 40-year-old Henry also won the 2012 tournament. His other PGA Tour title came in 2006 in his home state of Connecticut.

''I just love being here,'' Henry said. ''The people are great. It's just a beautiful spot to be this time of year to play golf. I think I figured out how to play out here in the altitude. A lot of math this week. Adding, subtracting elevation change and such.''

Henry jumped from 150th to 76th in the FedEx Cup standings and got a spot in the PGA Championship next week at Whistling Straits in Wisconsin.

Reifers had three back-nine eagles in a 22-point round to match Henry at 47 points at Montreux Golf and Country Club in the PGA Tour's only modified Stableford event.

Henry closed with a birdie for a six-point round. Players received eight points for double eagle, five for eagle, two for birdie, zero for par, minus-one for bogey and minus-three for double bogey or worse.

On 18 on the first extra hole, Reifers made a 12-foot birdie putt after Henry chipped to 1 1/2 feet to set up his birdie.

''Just disappointed,'' Reifers said. ''I performed the way I wanted to. ... That last putt there, that was a little disappointing, but all in all I take a lot of positives out, and see if I can get back in this position again soon.''

He's winless in 90 career starts on the PGA Tour.

''I know obviously how much a win would mean so it's disappointing, but like I said, I hit the shots and the putts that I wanted to,'' Reifers said. ''At the beginning of the day if you would have said I would be sitting here right now I would've obviously taken it.''

Patrick Rodgers was a point back after an 11-point round.

Andres Gonzales was fourth at 43 after a 10-point round, and David Toms was another point back after scoring two points. 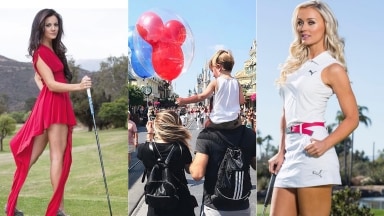 DJ and Paulina head to Disney World, as the LPGA asks fans to decide who gets a sponsor invite in this edition of The Social. 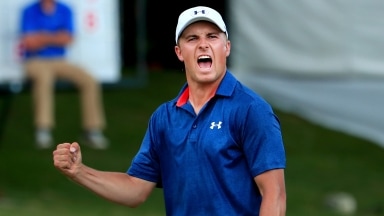 Jordan Spieth finished birdie-birdie-birdie on Sunday to shoot 5-under 65 and win the Dean & DeLuca Invitational by three shots over Harris English. 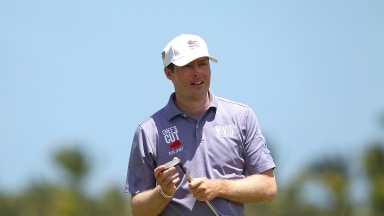 Jordan Spieth referred to The Players Championship as one of the hardest tournaments to win. Kyle Reifers had no idea it would be this hard just to play in it.