ENDICOTT, N.Y. – John Huston and Mark Wiebe shot 7-under 65s on Friday to share the lead after the first round of the Dick’s Sporting Goods Open.

Huston, playing just his third Champions Tour event since turning 50 on June 1, had seven birdies on a bogey-free day, nearly making eagle at No. 18 when his second shot at the par 4 hit the flag and stayed out. The tap-in birdie tied him with Wiebe, who also had seven birdies and no bogeys as he began his drive to win his second straight event. Wiebe won at Rock Barn two weeks ago.

Ronnie Black and Nick Price were tied for third at 6 under, while Steve Lowery, Hal Sutton, John Cook, and Peter Jacobsen were at 5 under.

The tournament, in its fifth year, has never had a repeat winner and that won’t change. Defending champion Loren Roberts withdrew Friday morning because of back and shoulder injuries.

It marked the second time this year that a champion did not return to defend. Bernhard Langer, who won the 2010 Outback Steakhouse Pro-Am, did not play it this year because of a thumb injury. 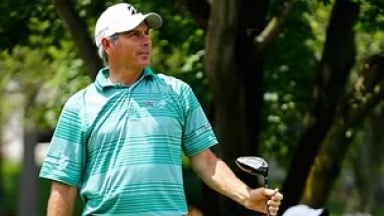 A downpour has halted second-round play of the Senior Players Championship until Saturday. 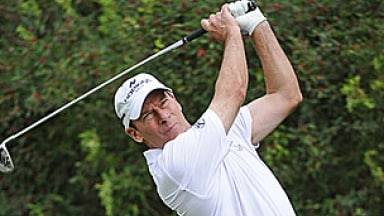 Rejuvenated after working with a back specialist whose client list includes Fred Couples, John Huston fired a 5-under 65 on Thursday to take the first-round lead in the Constellation Senior Players Championship at Fox Chapel Golf Club in Pittsburgh.

Peter Senior shot a bogey-free 67 and John Huston birdied No. 18 for a 68 on Saturday that left them tied for the lead at 12 under after the second round of the 3M Championship.