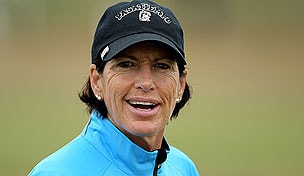 DALY CITY, Calif. – Juli Inkster believes the LPGA can become a success for the long haul in her native Bay Area.

Inkster is helping promote the inaugural Swinging Skirts LPGA Classic at Lake Merced Golf Club, marking the LPGA's return to the area for the first time since the 2010 CVS/pharmacy LPGA Challenge at Blackhawk Country Club in Danville.

The $1.8 million, 144-player Swinging Skirts tournament will run April 21-27 in this San Francisco suburb. It will be one of about 12 events the 53-year-old Inkster plans to play this year in a reduced schedule –though she makes a point to say she is not retiring but will take on some television work.

''It's not over, but I know the prime of my golf is passed,'' said Inkster, a native of Santa Cruz who played collegiately at San Jose State. ''I still like to play, I still like to compete. I'm looking forward to a new chapter.''

The Swinging Skirts LPGA Classic formally launched Monday with ticket sales and other details. The event features one of the higher purses for a domestic women's event, with the winner taking home $270,000.

While Inkster has watched some of the hard-hitting young women bring fresh energy to women's golf, she knows not everybody has seen the game's strides and is eager for fans in Northern California to get an up-close glimpse.

''I think it's going to be a great venue for it,'' Inkster said. ''It's tough, it's going to play like an Open. I hope we can keep this for a long time. It's important for the LPGA to be in this area. Women's golf has changed so much the last 8-10 years. ... It's a different LPGA than it was 10 years ago. It's important for young girls to come out here and see role models, 'Hey, I can do that.' We just don't have a lot of that around here.''

The goal is for Swinging Skirts to reach a long-term agreement with Lake Merced Golf Club after the first event, tournament executive director Kevin Hopkins said. The club has a 92-year history.

''It feels like the perfect home. It's an exciting time for us to bring this here,'' Hopkins said. ''We want it to be a fixture on the golf calendar for many years to come. We've obviously got a perfect venue for it.''

Inkster knows as well as anybody the challenges facing the LPGA in a busy sports market such as San Francisco, where there is competition with storied professional sports franchises. The culture, diversity and wide-ranging activities keep Inkster here. She lives in nearby Los Altos.

''Three, four, five years down the road you can make this a really good tournament. That's what you want, you don't want to just jump in and jump out,'' she said. ''I love this area. We have some great golf courses. ... Lake Merced, I'm telling you these girls better bring their A-game. Once these girls play Lake Merced they're going to want to come back for a long time.''

The Swinging Skirts Golf Team is a private, Taiwanese nonprofit of amateur golfers committed to growing the women's game globally. The group's chairman is an art aficionado, so there will be sculptures around the par-72 course.