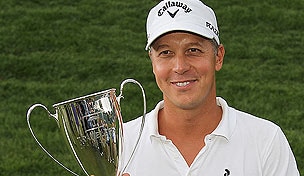 The Swede played in his first final group on the PGA Tour, won his first title on the tour, and gave his 5-year-old daughter her first trophy.

Jacobson shot a 4-under 66 in the Travelers Championship for a one-stroke victory over John Rollins and Ryan Moore, becoming the first international winner of the tournament since Greg Norman in 1995.

Jacobson said he promised Emmie that he would get her a trophy like the ones she saw other players holding up on television.

Jacobson, a 36-year-old who joined the tour eight years ago and has three European Tour victories, had just one bogey in the tournament and finished at 20 under, two shots off the course record.

“I was hitting so many fairways,” said Jacobson, who tied for 14th last week in the U.S. Open at Congressional. “It started clicking the end of last week. The last two days I struck the ball the best I ever have at the U.S. Open.”

Jacobson hit all 28 fairways over the weekend.

Rollins and Moore closed with 63s. Moore missed a 4-foot par putt on 18.

“I’m not beating myself up over that putt,” Moore said. “That happens in golf. … It was a pretty simple left-center putt, and I pushed it right into the middle of the hole and it just slipped by the side.”

Patrick Cantlay, the 19-year-old UCLA star who had a 60 on Friday to break the tour record for an amateur, finished at 11 under, in a tie for 24th, after weekend rounds of 72 and 70.

He arrived to a loud ovation on the 18th green, but bogeyed the hole.

“I just learned what it’s like to have a week on the PGA Tour, to make the cut and to compete with all the guys,” said Cantlay, the low amateur last week at Congressional. “This was just my second go-around and it was a lot of fun. The ovations are special every time.”

Rollins had four consecutive birdies to start the back nine and gave himself a chance to win at 18, by making birdie after hitting his second shot 4 feet from the pin.