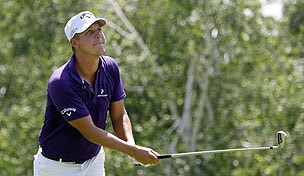 CROMWELL, Conn. – UCLA star Patrick Cantlay tumbled down the leaderboard a day after shooting the lowest score by an amateur in PGA Tour history, while Fredrik Jacobson had a 7-under 63 on Saturday to take a one-stroke lead over Bryce Molder in the Traveler’s Championship.

Jacobson closed with a 30-foot birdie putt on No. 18 to cap his third straight bogey-free round. The Swede opened with rounds of 65 and 66 and the 63 left him at 16 under at TPC River Highlands.

The 19-year-old Cantlay followed his course-record 60 with a 72 to fall five strokes behind Jacobson. Cantlay bogeyed the final two holes. An amateur hasn’t won a PGA Tour event since Phil Mickelson in the 1991 Northern Telecom Open in Arizona.

The 36-year-old Jacobson has three European Tour victories, but is winless on the PGA Tour.

Molder also is looking for his first PGA Tour win.

At 194, Jacobson was a stroke off the tournament record for 54 holes.

“It obviously takes some good par putts every now and then to keep a round like that going,” he said. “It’s nothing in particular I’ve been focusing on, but it just turned out that way.”

After two days of rain and drizzle, Saturday was mostly sunny. But Jacobson said the greens were still soft. That helped on 18, when he thought he had put too much pace on his birdie attempt.

“I was kind of hoping it was going to hit the hole and kind of lipped a little bit past it if anything,” he said. “But I was certainly happy when it hit the hole.”

Molder has made the cut in six of 17 tournaments this year, but a tie for sixth at Pebble Beach is his best finish so far this year. He had to play nine holes of his second round Saturday and finished with a 66 before starting the third round. His 210-yard second shot on the fourth hole came within a foot of the pin and got him going. He holed a 38-foot birdie putt on 17 that broke 6 feet from the left.

“You’re just trying to get it close, and what do you know, the hole gets in the way,” he said.

Cantlay, the low amateur last week in the U.S. Open, had a one-shot lead after a birdie at 12. But he hit his drive right and into the water on the par-5 13th, a hole he eagled twice Friday. He found the water again on 17 and hit his second shot on 18 into a greenside bunker.

“I hit a couple of bad drives coming in, and it cost me,” he said. “I could have made a couple more putts, as in every round, but I’m in a good spot, and I’m looking forward to tomorrow.”

Cantlay has already made it into the Golf Hall of Fame – or at least his ball and scorecard have, along with a pin from Friday’s record round.

James Driscoll shot his second consecutive 64 to move into third place at 13 under.

“I don’t know if you’ve ever checked the record books, but no one has ever won every tournament,” Watson said. “I’m not making the putts. I’m not hitting good iron shots when I need them.”

Nate Smith had the shot of day, acing the par-3 fifth hole from 221 yards. Unfortunately for Smith, he followed that up with a bogey on the par-5 sixth hole, and finished the day 12 shots off the lead.

Jacobson is trying to become the first player since Lee Trevino in the 1974 Greater New Orleans Open to play 72 holes without a bogey. But he’d be happy just to get the win.

“I don’t think I’ve played in the last group on a Sunday,” he said. “I think I’ve been kind of within reasonable reach, but been looking forward to getting myself in position where I can get tested, you know, put myself in that position.”