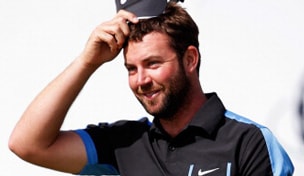 Jamieson made 11 birdies for a 11-under total of 199. The Scot made par on the final hole after missing a putt that would have given him the unprecedented 59. Instead, he is the 18th golfer in European Tour history to shoot 60.

After sinking a birdie on the 13th hole, Jamieson told his caddie ''a few more and we could be part of history.''

''I was definitely nervous,'' Jamieson said. ''But thinking about it from the tournament point of view, the leaders are going to be a minimum of 16, 17 maybe 18 under going into tomorrow. So that kept me going from a pushing point of view.''

Waring came in with a share of the overnight lead and birdied the 16th and 17th holes on the Oceanico Victoria course to take sole possession of it.

Simon Thornton, Jamie Donaldson, and Hennie Otto are tied with Jamieson at two shots off the leader.

Chris Doak and Spaniards Pablo Larrazabal and Alvaro Quiros are another shot behind heading into Sunday's final round.